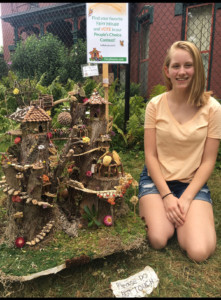 Local artist, Destiney Schultz, wins another Peoples Choice award at the Rochester Cornhill Arts Festival, Fairy House Competition. This teenager has been creating fairy houses for a number of years and giving enjoyment to the community in many areas.

Schultz (pictured here) designed and built her first fairy house for the Artpark Fairy Festival in Lewiston, NY. She was nine years old and won grand prize that year. At the Cornhill Festival Destiney has entered four fairy houses that have all gone on to be displayed at the Strong Museum of Play. Presently, Miss Schultz’s first fairy house can be viewed at the Tinker Nature Park, along the fairy trail. Her third and current houses are being featured at the Rush Public Library and at the Gates Public Library, respectively.

Destiney’s desire is to encourage children to get outside and play and for people of all ages to express themselves creatively. She hopes to inspire people through personal example to reflect on natural beauty and fresh air activities. Destiney loves to see how her fairy house can encourage those who view it and loves seeing the joy it can bring to others.

Her fairy houses include additions such as a library made of rose petal books, music rooms with a myriad of instruments including, drum sets, cellos and an upright piano. Other notable fairy house aspects include feather swings, four poster beds, and secret lookouts with telescopes.

It’s fair to say that we all can appreciate pieces of nature assembled with nought but a glue gun and a wild imagination. If you’re interested you can check out an interview with this artist at Cornhill’s facebook page.