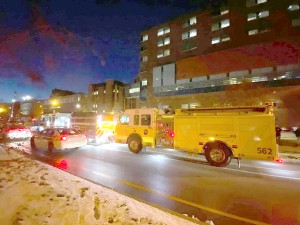 Throughout December, first responders from around the area come to Golisano and turn on their flashing lights for the kids hospitalized there. It is a way for the first responders to say good night to the kids and give the kids something to look forward to during the holiday season. Police agencies, including city police, Monroe County Sheriff’s Department, New York State Police and town police agencies along with county fire departments and fire departments from outside Monroe County as well as EMS agencies are participating.