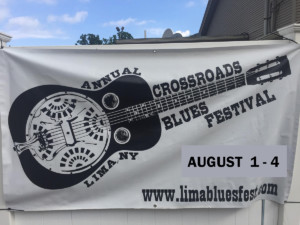 BY DEB AND TIM SMITH
What would be better than taking advantage of a beautiful summer weekend by heading out to enjoy some live music, and knowing that entertainment will be provided for the kids if you have them? Answering that question, what could make it even better would be knowing that entertainment will be provided free of cost for both the kids and the adults. Sounds like a good deal to us!
This attractive offer will take place at the 2019 Lima Crossroads Blues Festival which has experienced a remarkable revitalization over the past five years. It’s continued to grow and this year it’s even bigger than ever. What turned things around? Read on and we’ll fill you in.

Our “bigger than ever” line is a reference to the fact that the three-day event has expanded to four days this year, August 1-4. When we contacted Jim Shelly, a man who we knew to be one of the many hardworking members of the Lima Crossroads Council he led by exuberantly saying, “Deb & Smitty, the tent is going up a day earlier this year!”

The first musical notes will begin to waft their way into the sultry summer sky at 7:00 this Thursday night, Lima standard time. There will actually be four different Lima locations from which the tunes will be emanating throughout the festival. The two primary venues will be a 4,000 square foot tent set up in the parking lot by Fanatics (west tent) and a 2,000 square foot tent near the Town Hall (east tent). The website schedule that tracks the acts uses the “east/west” designations to direct destinations.

Six years ago, with Lima Festival attendance lagging, the Lima Crossroads Council decided to experiment with the concept of incorporating the musical component of the blues festival to the more established elements such as the kids’ activities and of course the unique local favorite, the bed race.

This year the Lima gala has lined up 16 musical acts performing with staggered starts on multiple stages in a festival event that totally exceeds what one might expect to see in a small town like Lima.

The town will be filled with food vendors and beer trucks and it will be the only 4 days of the calendar year that Lima suspends its open container law. When the concert ends at the east tent you can take your beer with you as you traverse the 4-corners on your way to the west tent. Be careful as you cross though as jaywalking laws will still be enforced.

If you were pondering a visit to the 50th anniversary of Woodstock and disappointed that it didn’t pan out, here’s your backup plan. Four days of music, peace and love with two major benefits . . . you don’t need to buy a ticket and you won’t have to go to the bathroom in the woods.

Times and schedules for all the activities are available at the festival website LimaBluesFest.com. Lima is lovely this time of year and we hope to see you there.