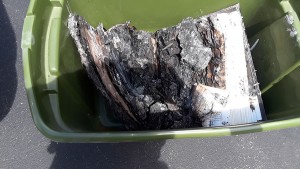 When the church organist arrived at Lima Presbyterian Church this past Sunday (August 23) at 9 a.m., he discovered something that no one wants to discover.

The organist, Peter Geise, found the building, located at 7295 West Main Street in the village, full of smoke. He immediately called 911. Lima Fire Department, Honeoye Falls Fire Department and East Avon Fire Department responded, along with Lima Volunteer Ambulance and the Livingston County Sheriff’s Department. It was discovered that someone had broken in, removed the pulpit Bible, put it on the floor by the front pew and set it on fire. The fire had apparently smoldered for some time, burning the Bible, the pew cushion, the front pew and the floor in front of the pew. 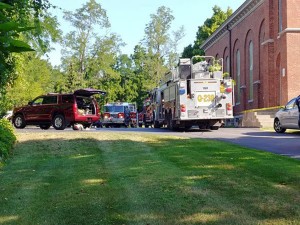 The firefighters put out the fire and then went to work using fans to help ventilate the historic building, which is at the four corners of the village (the intersections of Routes 5 & 20 and Route 15A). The church, built in 1873, did not have much fire damage, but there was a lot of smoke damage. Church officials do not know if the smoke damaged the church’s pipe organ. The organ was dedicated following a restoration project in November 2018.

Pastor David Kilgore was on vacation so Rev. Bruce Boak, the substitute pastor for the Sunday worship service, gathered worshippers together (the church began limited in-person worship on July 5) and held a brief service on the church’s front lawn because the church was now a crime scene. They gave thanks to God for the minimal damage to the building, for the first responders and also prayed for the person(s) who set the fire.

“My wife and I pulled in about 9:10 a.m. and Peter said that he had called 911 because of smoke in the church,” said Boak by phone on Monday night. “The fire departments got there right after we did.”

For Rev. Boak, in a way this was deja vu all over again as Yogi Berra used to say. Boak was pastor of the First Presbyterian Church of Pittsford when it was struck by lightning on May 20, 2004. The lightning strike caused a fire that heavily damaged that church, causing its roof to collapse into the sanctuary.

“Obviously, this is much worse because this was a deliberate act as opposed to a lightning strike, which is an act of Mother Nature,” Boak said. “At the brief worship service outside on the lawn, we had some Scripture readngs and prayers; prayers of thanksgiving that the church had minimal damage, prayers for the first responders and prayers for the person or persons who did this. We also prayed for all victims of fires, such as the people enduring the wildfires in California.”

Kilgore, who was notified of the incident immediately, said on Monday in a phone interview, that it appeared someone entered the building through the basement.

“Many people’s first thought when we realized there was minimal damage to the building was how much damage was done to the organ,” Kilgore said. “Right now, we still don’t know. Thankfully, Peter is an employee of Parsons Organ Builders Company in Canandaigua so we will have them come out and take a look at the organ.”

Kilgore stated that the Lima Farmers Market was still going to be held on the church’s front lawn on Tuesday, August 25, as originally scheduled. Plans for worship on August 30 have not been made.

Fire investigators tentatively attribute the fact that the fire did not spread due to the quality of the old oak furniture and floorboards, Kilgore stated. The fire was small but it threatened a significant local landmark. Kilgore also expressed his thanks to the firefighters, the ambulance personnel and the sheriff’s deputies and Livingston County Fire Investigators from the County Emergency Management.

The church, organized in 1795, is the oldest Presbyterian Church in the Genesee Valley Presbytery, which encompasses 61 churches in Rochester and a surrounding five-county area. The current church was designed by John Rochester Thomas, a Rochester-born architect who had a prominent career designing buildings in New York City. It is in the Romanesque revival tradition as evidenced by the round, arched windows along both sides with some Gothic elements. It is one of the places in Lima that comprise the Lima Village Historic District’s entry on the National Register of Historic Places. The only other time a fire has occurred at the church was in the 1920s when a lightning strike caused a fire that burned down the church’s steeple.