Live! For the Next 3 Weeks! It’s the Monsignor Schnacky Community Players virtual show! 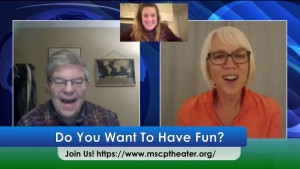 Andrea Borrelli (center) directs Bruce Chapman (left) and Elsa Steo (right) during rehearsal for this year’s production, which will be broadcast live over the internet. Screen shot by Chris Carosa

The Monsignor Schnacky Community Players are proud to announce this year’s virtual show, FACE TO FACE TIME WITH THE SCHNACKYS. The group has not let Covid keep it down!
The inspiration for this concept sparked in the mind of Director Andrea Borrelli when she was a guest on the Honeoye Masonic Lodge’s Union Star Lounge back in June. That show, Dedicated as “A Salute to the HFL Class of 2020,” was produced by the Sentinel’s sister company Pandamensional Productions.

Borrelli realized that this platform could allow the Schnacky’s to perform for their audience. The Players got to work and created a great line up.  They have performances from the past 39 shows as well as brand new acts that will thrill our audience.

The creation of these new acts, called “Schnacky’s Got Talent,” was done in a “Covid safe” manner with a makeshift studio complete with a green screen and a sound booth.  Patrick Ashley, the “Schnacky’s Got Talent” Director, was responsible for the pre and post-production.  All of the new acts were created by the Schnacky Players.

There will be free giveaways every night and an opportunity to donate to the Players so that they may be able to bring you quality shows well into the future.  Should you miss a show they will also be recorded on You Tube and Facebook.

For direct links to the shows and other important information please visit MSCPtheater.org. The show must go on!