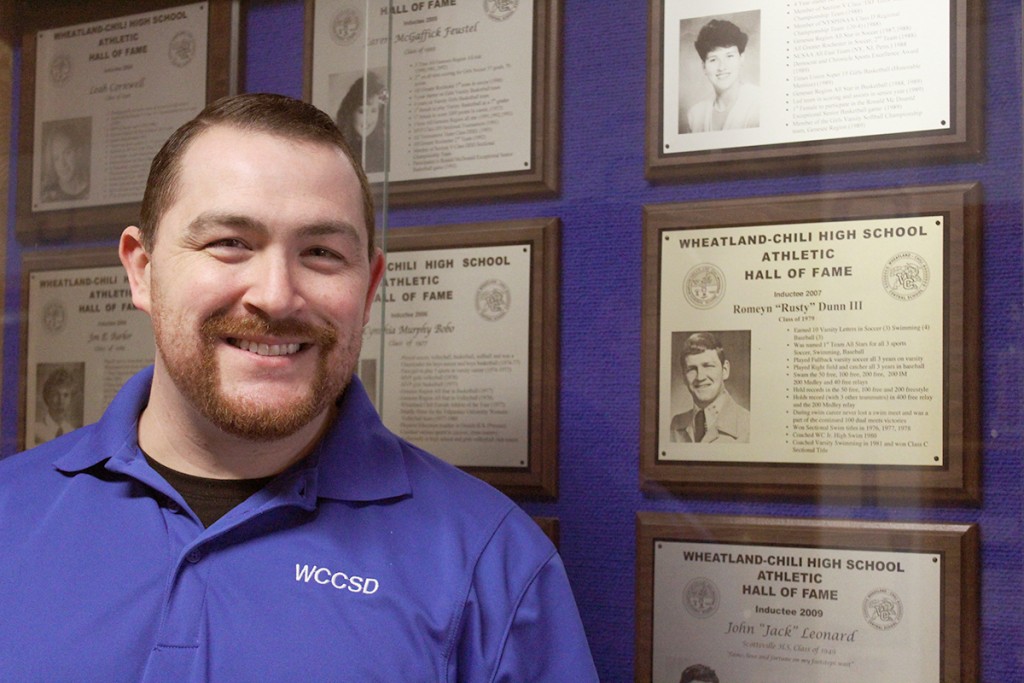 Coach Greg Dunn poses next to his father’s Hall of Fame plaque. Photo by Gretchen Spittler

Wheatland-Chili Varsity Swimming Hall of Famer Rusty Dunn was undefeated in the pool. He never lost a meet. He was at the heart of the swim program during the legendary 100 meet winning streak of the late 1970s. Forty years later, Rusty’s son returns the Dunn name to the Wheatland-Chili pool.

“My dad taught me everything I know,” said first-year Varsity Swim Team Head Coach Greg Dunn. “I try to take the lessons that he taught me and use them when I’m working with the kids.”

“Coach Dunn is a nice guy,” said sophomore Tyler Krull. “He makes us work hard but it pays off.” Krull is a free-style sprinter in his second season with the team.

Dunn grew up in the pool, working alongside his father. He learned to swim at two years old and, although he did not attend a high school with a swimming program, he lifeguarded in college and continued fitness swimming as an adult.

Dunn is new to the swim team, but a familiar face at Wheatland-Chili MS/HS. He works in security at the District, is Head Coach of the Girls Varsity Track team, and Assistant Coach of the Boys Varsity Soccer team. As a result of these roles, Dunn has many opportunities to interact with students.

“I keep advocating for the program,” said Dunn. “I try to talk to as many kids as I can. Already this season, we have almost tripled the number of team members from last year.”
In addition to his on-site recruiting efforts, Dunn has another reason to be excited for the future of the team. “Coach Brian Glass has strong numbers coming up from the modified team. I hope to roll their enthusiasm onto the Varsity roster.”

“My goal is to make swimming fun for the students,” said Dunn. “I want to rebuild the program’s former strength and start putting wins back on the board. I am proud to be part of the Wheatland-Chili swimming legacy.”