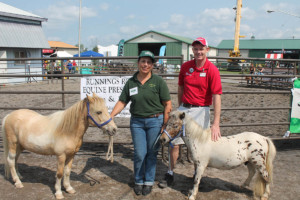 Empire Farm Days has announced Begin Again Horse Rescue of Lima, N.Y., as a featured equine presenter in the Runnings Round-Up live horse round pen for the agricultural and rural living show in 2019 at Rodman Lott and Son Farms in Seneca Falls, N.Y.

The volunteer-based not-for-profit organization that maintains a 28-acre farm in Lima and uses a network of foster farms to help neglected, abused and at risk equine animals will be the featured presenter on Thursday, August 8, 2019, at 11 am and 2 pm at Empire Farm Days at Rodman Lott and Son Farms.

Begin Again Horse Rescue rehabilitates and places horses of all breeds, mules, donkeys, drafts and miniature horses through permanent-lease adoption to qualified homes. Co-founder and president Jennifer Lilly was a popular new presenter at Empire Farm Days in 2018 along with miniature horses who serve as educational animals with the program.

“Empire Farm Days was a great place to meet horse enthusiasts and to inform the public about the proper care of horses and how programs like Begin Again Horse Rescue are helping animals overcome neglect or abuse, whether it is from ignorance, loss of interest or personal crisis,” says Lilly.

Begin Again Horse Rescue volunteers will have adoption information, donation opportunities, and theme clothing for purchase at the show on Thursday.

Jack and Emma Minteer of Rose Hill Ranch, Naples, NY, will be at the show on Tuesday, August 6 with their wild-to-mild American Mustangs. Teenage trick rider Courtney Jean Schum of Tanglefoote Stables in Alexander and Sheldon, NY, makes her debut at Empire Farm Days on Wednesday, August 7.

The Runnings Round-Up live horse demonstrations are part of the activities, seminars, information exhibits, test drives, field demonstrations and fun at the Empire Farm Days agricultural and rural living showcase. Admission is free; parking is $10 per vehicle. Watch for more details at www.empirefarmdays.com and on Facebook.