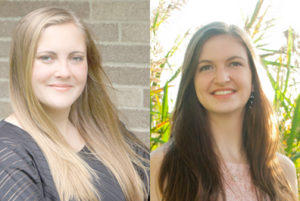 Elizabeth Russell and Madeline Vonglis tackled their challenging academic courses with determination, hard work and perseverance and the two are also role models for younger students at Wheatland-Chili High School.

Russell was named valedictorian of the Class of 2016 at Wheatland-Chili after achieving an academic average of 97. The daughter of Leona and David Russell, Russell will attend Roberts Wesleyan College to study childhood education with a concentration in math and science. She also considered Nazareth College.

“I love being with kids,” Russell said last week. “My mother has a day care and I also work in the recreation program. I exceled in math and science; they are challenging but I love them.”

Russell chose Roberts Wesleyan because it is smaller and has faith-based learning connected to it. She will be in the Global Honors program there. She took three Advanced Placement courses: AP Biology, AP Calculus and AP U.S. History and also took Economics, Computer Application, Accounting and Spanish 5 for college credit through Monroe Community College.
Academics did not consume Russell’s time, however. She was a member of National Honor Society, serving as its vice president, and Students Against Destructive Decisions (SADD), serving as its president. Russell was also vice-president of Leadership Asset Training and was involved with the Interact Club, FBLA (Future Business Leaders of America), Masterminds, Student Council and International Club. She was in the concert band and the pit band for the school musicals, playing the flute. Russell plans to continue with the flute next year by playing in the college’s Wind Ensemble.
Outside of school, Russell was also involved in a community youth group which was service-based and also in the youth group at the church she attends in Chili. She has also been in the Girl Scout program since she joined Brownies in the first grade. She is currently with Girl Scout Troop #60679.

Russell has received several awards and honors. She earned the Young Citizen of the Year Award and the Frederick Douglass and Susan B. Anthony Award in Humanities and Social Science from the University of Rochester as a junior. This year, she has received an Etta Fraser Miller Fund Scholarship, the Dr. Louise Sheinman-Pask Memorial Scholarship from the Rotary Club of Scottsville, the Wheatland Republican Committee Scholarship, the Valedictorian Award, a Presidential Outstanding Academic Excellence Award, the Citizenship Award in honor of Paul Czapranski and the John Philip Sousa Band Award.

Athletics was also a part of Russell’s high school years. She was a member of the varsity volleyball team for four years. A co-captain last fall, she compiled a team-high 93 kills as the starting middle hitter with 38 blocks, over 30 digs and over 25 service points. Russell, 18, was on the varsity basketball team for three seasons. The starting center this winter, she averaged eight points, 12 rebounds and two blocks a game as the squad won the Section V Class D1 Tournament. She competed for the track team for two seasons. Perhaps not surprisingly, she took on the sport’s most challenging event, the pentathlon (which is composed of five different events), and she compiled 1,377 points to place sixth at the Genesee League Championship and 1,368 points for sixth at the Section V Class D Championship this spring. Among her honors athletically are being named a Genesee Region Exceptional Senior and an All-League honorable mention in volleyball, a Genesee Region Exceptional Senior, a member of the Section V Class D1 All-Tournament team and an All-League honorable mention in basketball and then receiving a Randy Carpenter Memorial Scholarship and a U.S. Army Scholar Athlete Award at Awards Night in June. She is thinking of playing junior varsity basketball at Roberts Wesleyan.

“One of my favorite memories is of the basketball team and winning sectionals this year,” Russell said. “We had a great season after not being sure how well we would do this year without the seniors who graduated in 2015. After winning the sectional title, we won the state Class D qualifier game and then played, but lost, in the state quarterfinals. There was a pep rally at the elementary school for us and it was so neat with the younger kids.”

Vonglis was named salutatorian of the Class of 2016 as a result of her 96.8 academic average. The daughter of Kay and James Vonglis, she will be studying engineering at the University of Rochester but is unsure what discipline of engineering she will end up concentrating on. She also looked at Rochester Institute of Technology.

“My teachers inspired me to go into engineering,” she said.

Beyond her classroom work, Vonglis was very involved in school. She was a member of the National Honor Society, where she held the office of secretary, and Masterminds. Vonglis, 17, also was in the Drama Club and Show Choir.

Outside of school, Vonglis has worked as a lifeguard for Wheatland Recreation and at Blueberry Hill Apartments in Chili. She also works at Stokoe Farms. She was in the Girl Scouts through her freshman year of high school.

Vonglis has earned several awards, including an induction into the American Chemical Society and an award. This year, she has received the Ella Casey Math Excellence Award, an Etta Fraser Miller Fund Scholarship, the Salutatorian Award, the Wheatland-Chili Federation of Teachers Scholarship and a Presidential Outstanding Academic Excellence Award.
A three-sport athlete, Vonglis competed on the cross country running team for three years. She was 35th in 22 minutes, 36.45 seconds at the Genesee-Livingston League Championship and 25th (23:42.7) at the Section V Class D Championship. She competed in the swim program for six years and was co-captain of the varsity girls squad this winter, finishing 11th (6:48.91) in the 500 freestyle and 15th (1:32.12) in the 100 breaststroke at the Genesee League Championship. Vonglis was on the varsity track team for five years. She finished ninth in the 3000 meters (13:18.2) at the league championship and 10th (12:57.42) in the event at the Section V Class D Championship. She was twice named the Most Valuable Player for the cross country running team and was an All-League 1st team selection for cross country running for two years. She was an All-League honorable mention for swimming this past winter. She does not intend to pursue a sport in college except at the club level.

“My favorite memories of high school are technology with Mr. Handley, math with Miss Alhart, my technology classes and Kamikaze running with the cross country team,” Vonglis said.