The return of hoops, wrestling and hockey will be five week sprint

Home The return of hoops, wrestling and hockey will be five week sprint 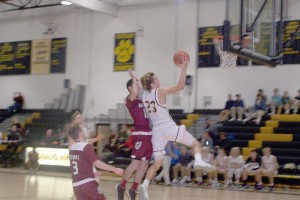 HF-L’s Patrick Lustyk and the rest of the Cougar varsity boys basketball team return to the court with games next week. File photo by Donna MacKenzie

What is usually a three-month marathon full of highs and lows will be more like a Usain Bolt dash that passes by so quick that if you blink you may miss it when the high school winter sports of basketball, hockey and wrestling make their return, starting with practices that began on Monday, February 1.

When the New York State Public High School Athletic Association announced that the state Department of Health released guidance on January 22 to allow high-risk winter sports such as basketball, hockey and wrestling to start practices and play, it set in motion a fast-moving chain of events. Section V’s COVID -19 Task Force and the sport coordinators began to plan while waiting for approval from the 12 different county health departments within Section V’s boundaries. In addition, the Section V Athletic Council set regular season dates and tournament structures for the winter high-risk sports. The regular seasons must end by Saturday, March 6 and the Section V tournaments must be completed by Sunday, March 14.

“The kids and coaches of these sports are very excited,” Honeoye Falls-Lima Athletic Director Brian Donohue said last week. “Through all this the coaches and kids have been impressing on each other the need to keep up with the protocols and that has been true going back to the fall and the start of school and the kids have been serious about following the rules with masking, social distancing, etc. In fact, our end-of-season banquets for our teams last fall were held for the players only in our new larger cafeteria at the high school while parents joined us virtually.”

Wheatland-Chili Athletic Director Todd Grimes said his student-athletes were also extremely happy after seeing their winter sports seasons be in limbo for over two months. “The kids are just incredibly excited,” he said. “For some, it’s the first time I have seen big smiles on their faces because some of these kids haven’t played a sport in almost a year.” 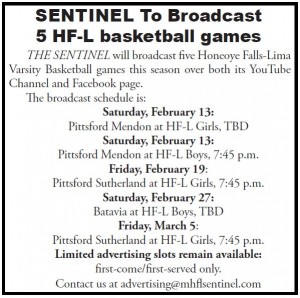 “On the boys side, we have some light numbers and a very young group,” said LCS Athletic Director Mike Burns, where the teams play in the Private-Parochial League but the school falls under the Livingston County Department of Health, which has okayed the high-risk sports. “We decided because of those factors, we would field only a JV team to put the boys in the best position for having some success, having fun and staying safe. On the girls side, we have about 15-16 who have indicated interest in playing but because we don’t know until they come out, varsity girls coach Dave Tillapaugh and I decided to go with just one team so that if we have injuries we can still field a team without pulling up JV players and thereby shorting the JV squad.”

During a phone interview on Friday, January 29, Burns said that as of that day, he had only seen a draft schedule for the Private-Parochial League for the varsity girls. That schedule would include games against fellow league members C.G. Finney, Northstar Christian Academy, Chesterton Academy, Eugenio Maria Hosta Charter School(CHECK), Rochester Academy Charter School and Rochester Prep Charter School.

“I anticipate a final schedule being finalized early next week,” Burns stated.

For Wheatland-Chili, students will be back in action for boys basketball, girls basketball and hockey where W-C is part of a four-school merged team with Gates Chili, East Irondequoit and Wayne Central. Grimes said it looked like two W-C boys would be playing hockey for the combined team: senior Anthony Polisseni, who played for the combined squad a year ago, and freshman Ethan Hallock. As of Friday, January 29, Grimes said he had not seen a final hockey schedule. In both boys and girls basketball, W-C competes in the Genesee Region League and those schedules were finalized as Grimes said that there had been multiple preliminary talks over the past several weeks about how to structure the league schedule should the green light be given for basketball.

“We will play everyone in the Genesee Region League once so that gives us 10 games for both the boys and girls basketball teams,” he said. “We have the ability to add two more games and we have 11 right now as both our boys and girls will play our neighboring school, Caledonia-Mumford, like we usually do. It looks like we will be able to field JV and varsity teams for both boys and girls. One week, the boys will play on Tuesdays, Thursdays and Saturdays while the girls play Mondays, Wednesdays and Fridays and then the following week they will flip-flop those days. The first game for our boys teams will be February 9 and the first game for our girls teams will be February 10. Temperature checks will be conducted on athletes before home games and before they board the bus for away games. The league has said that only home spectators will be allowed at games and two spectators for each athlete with masking and social distancing for fans enforced.”

Grimes is concerned about the cheerleading program as that sport has been put off until the Fall 2 season, which begins March 1 as there are some cheerleaders who usually play volleyball which is also in the Fall 2 season this year.

At HF-L, Donohue is dealing with schedules for four sports: boys basketball, girls basketball, hockey and wrestling. As of Friday, January 29, he had 20 kids signed up for wrestling (JV and varsity combined).

“There will be five matches and the team will compete on Wednesdays and Saturdays,” Donohue said. “Our first match is scheduled for February 13 and there will be no tournaments, including no Monroe County Championship tournament. The Section V Tournament will be held the first week of March. My understanding is that they will try to wear masks.”

HF-L students will again be part of a combined hockey team with Brighton and East Rochester. Donohue said that 15 students had signed up for the team as of January 29. A hockey schedule had not been finalized as of January 29.

Schedules had been finalized by the Monroe County League for the Cougars boys and girls basketball teams. One week, the boys will play Tuesdays, Thursdays and Saturdays while the girls will play Mondays, Wednesdays and Fridays and the following week, they will flip-flop those days. Players will be masked on the court. Both the boys and the girls basketball programs have about 12-15 students signed up both at the JV and varsity levels. To accommodate the potentially larger teams, the bleachers will be empty behind the team benches so that six feet distances can be maintained between players when they are not out on the court.

“There will be just two spectators per athlete,” Donohue said. “In addition, we have adjusted the start times for the JV and varsity teams. JV games will be at 5:30 p.m. and varsity games at 7:45 p.m. This will allow us more time to clear the gymnasium after the JV game, wipe down seats and disinfect as needed and then sign in varsity game spectators.”

HF-L’s boys and girls basketball teams will each hopefully have 12 games. The Lady Cougars have a full 12 game schedule, playing their Monroe County Division 4 opponents twice (once home, once away) with three crossover games against other Monroe County schools and one non-league game, that against Aquinas. The girls basketball teams start play February 8. The Cougar boys have 12 games scheduled, again home and away against their four Monroe County Division 4 opponents (for a total of eight games), two crossover games within the league (one with Pittsford Mendon and one with Pittsford Sutherland) and two non-league games against Early College and School of the Arts.

“For competitive cheerleading, the Section V Cheerleading Committee was given a choice of either the winter season or the Fall 2 season and they chose the Fall 2 season,” Donohue said. “Therefore, our cheerleading program will compete starting in March, the same as our football and girls volleyball programs.”

At HF-L, at least two students have already competed in a winter sport different from their normal one. Griffin Mayo (hockey) and Reece Joint (basketball) are members of the boys varsity swim team. Asked if they would be allowed to resume their usual sports once swimming gets done on February 10, Donohue said yes.

“Earlier this year, the league agreed to allow dual sport athletes (two sports at the same time or within the same season),” Donohue said. “This was done knowing that some kids might try a different sport while their usual one was on pause and so they didn’t get punished for that decision if their original sport opened up. So Griffin will be allowed to play hockey and Reece will be allowed to play basketball.”

With only a 12-game season, HF-L girls basketball coach Steve Willoughby and HF-L boys basketball coach Kevin Neenan agreed that each game is going to have meaning because of the fact that only eight teams will qualify for sectionals.

The Cougar boys will have home-and-away games against divisional opponents Batavia, East Irondequoit, Greece Odyssey and Greece Olympia for a total of eight and then picks up games against Early College, Pittsford Mendon, Pittsford Sutherland and School of the Arts for its total of 12 regular season games.

“Normally, we have a three-week preseason for teams to start to jell together, but as we told the kids, we practice this week and start play next week,” Neenan said. “But, we have had eight weeks of skills and drills. It wasn’t like normal practices where we could work on defense in particular, but they have been together, so hopefully it will work out.”

Both coaches said they are just glad that the kids, particularly the seniors, get a chance to play.

“We’re fortunate to have the chance, because the window of time for the season to get in was closing rapidly since the Fall 2 season starts March 1,” Neenan said. “We have had workouts and the kids have been diligent about following masking and social distancing protocols, even when things didn’t look good for a season. They’re just excited to finally get the chance to be able to play.”