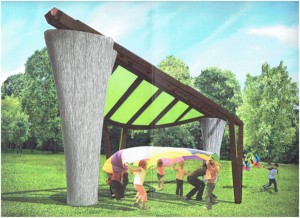 By Jared Gooding
Honeoye Falls-Lima Primary School is currently developing an outdoor classroom for its students on the school’s grounds in the village of Lima. The ongoing project of four years is designed to bring the traditional classroom outdoors and is expected to be completed in around two years. The outdoor space is made up of many different sections, including a large brick pathway, a music stage, small trails around a wooded area, and an overhaul of the landscaping. A large pavilion is also soon to be built, fitting the outdoor theme with an elegant leaf design.

The Lima School has both kindergarten and first grade students, and one goal of the new project is to have the students spend more time outdoors, while also getting the same or an even more in depth experience as they would in a normal classroom. As the principal of the Lima school Lisa Moosbrugger puts it, the outdoor classroom is simply “an extension of what the students are already doing.”

The outdoor classroom has received plentiful support from the community, and is seen by many as a great improvement to the school. However, there has been some opposition from a homeowner close to the school claiming that the classroom is encroaching upon their property and should not extend so far away from the school. In addition, another member of the community has complained that the outdoor space is a waste of taxpayer resources and will not have a worthy effect on the students. The classroom is however within school property, and Moosebrugger has stated that “All funding has been from donations, the work of local boy scout troops, and fundraisers specific to the outdoor classroom.” Many different portions of the space have been built by a local boy scout troop, including the brick pathway, music stage, small bridges, and a portion of the landscaping.

The outdoor space is designed to accommodate any traditional indoor lessons, as well as new activities exclusive to the outdoors such as studying the nearby trees and surrounding ecology. Other activities emphasize physical movement such as building and climbing, allowing students to be more active during the day. Many improvements have already been made, and when the project is complete it will provide an important space for the young students to play and learn.