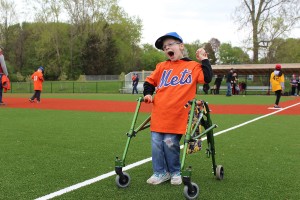 BY JENNIFER CROWLEY
Six-year old Trevor Bansbach might not say a lot, but when you have a smile like his, you don’t need to. Trevor, who is in Kindergarten at T. J. Connor Elementary School, suffered two strokes as an infant (the first while he was still in his mother Mary’s belly), leading to impaired cognitive and motor functioning. He was formally diagnosed with cerebral palsy several months after his birth and today uses a wheelchair and/or walker to get around.

Trevor’s “disability” rarely seems to get in his way. He is a strong yet serene little boy who loves playing with other kids and lollypops. He is the youngest son of Mary and her husband Tim who have two older sons, Torrence and Robert. Torrence is in fourth grade and has spent the last few years playing recreational soccer, baseball and hockey. Trevor has been to virtually all of Torrence’s games, a fixture on the sidelines, spectating all of the action.

But why should Trevor miss all the fun? That was the question that led his parents to explore a program called Challenger Baseball. Little League Baseball established the Challenger Division nearly 30 years ago to allow children with physical and mental challenges to enjoy the game of baseball regardless of what mobility or other aids they require. Today in the Rochester area there are nine Challenger leagues with more than 400 kids and young adults participating. And since the program is supported by a variety of non-profit means including private donations and other sponsorships, many families participate at no cost.

“Trevor plays in Webster on a new field called Miracle Field. The field is all flat turf and the base lines, ‘dirt,’ pitchers’ mound and bases are all painted on making it so much easier for those with balance or visual problems, or children with wheelchairs or walkers, to play on. The dugouts are also larger in size to accommodate any additional equipment the player may need,” explained Mary.

Miracle Field broke ground in 2016 and just kicked off its inaugural baseball season. The field will also be available for adaptive soccer and other sports. “Until Miracle Field was built, teams would have to use whatever field in their town was available on game day which meant that often the field could be quite bumpy and lacking in wheelchair friendliness. But now these kids have a field they can call their own, one that was built expressly for them,” added Mary.

As for Trevor’s teammates at Challenger, each has a condition making participation on a ‘regular’ team simply not feasible. “The players have a wide variety of medical issues. Some players have cerebral palsy like Trevor, others have Down syndrome. Then there are the children who may not look like they have any impairment, but deal with less outwardly obvious challenges such as hearing loss or diabetes. Some players use the help of a volunteer ‘baseball buddy’ for base running so that their parents can actually sit, watch, socialize and enjoy the game,” according to Mary.

“Then there are the kids like this one young girl who had both legs amputated above the knee — she hits and runs the bases with no help at all.”

When Trevor is up to bat, he sometimes uses a batting ‘T’ though other times enjoys the chance to hit a pitched ball. In his first games he was pushed around the bases in his wheelchair but more recently, thanks to the design of Miracle Field, he uses his walker to round the bases. “Last year it was hard to roll his walker through the uneven base paths and grass. That would really frustrate him. Sometimes the coach would just carry him around the bases.”

Challenger games are typically short, just a few innings, with no scorekeeping and no outs. Mary describes the scene as organized chaos. “When the team takes to the field, there are kids and helpers all over. Some pay close attention and get very involved with fielding and throwing, others need a little help, and yet others need a lot of help. But the emphasis is always on fun and inclusion.”

For families raising children with physical or intellectual disabilities, it can be incredibly difficult to find appropriate social and recreational outlets for the whole family to enjoy. But Mary adds that the programs are out there, if you know where to find them. “Off the top of my head, Special Olympics, adapted gym programs through TSE or CP Rochester, ‘sensory friendly’ days at the museums, and sled hockey (another one of Trevor’s past times) to name a few. Miracle Field is also planning a new playground to accommodate kids who need ramps and other adaptive equipment.”

Prior to starting kindergarten at T.J. Connor last September, Trevor had only attended school at CP Rochester. Through that organization he received Early Intervention services and was able to take advantage of unique offerings such as water therapy. They were also hooked into community recreation programs including therapeutic horseback riding.

Trevor is currently the only student at T.J. Connor in a wheelchair, and Mary can’t say enough about how the district stepped up to make Trevor’s first year at traditional school a fabulous one. “All in all, his first year at school went really well. He learned so much both academically and socially. And really the administration found ways to eliminate as many barriers to his success as possible. They had to figure out if the wheelchair bus broke down, where could they borrow one from. The school also ordered a walker for him so we didn’t have to transport his every day.”

Mary added that the teachers and Trevor’s classmates have truly taken him under their collective wing, assuaging so many of her fears about transitioning him from a specialty school setting into a public one. It isn’t lost on her that Trevor’s classmates benefit from being exposed to him just as much as he benefits from the rapport and bonds he’s experiencing as a result of being in class with them. “At the beginning of the year I went into his classroom and told the kids about him and it really helped them not be afraid of him. I believe that if we can appropriately expose kids to the realities of life at a young age, they can earnestly learn empathy and respect.”

For anyone interested in taking a look at Miracle Field, there is an opening day celebration for the public at the field on Sunday, June 3rd from 1:00-4:00 P.M. To learn more about CP Rochester, visit www.cprochester.org.