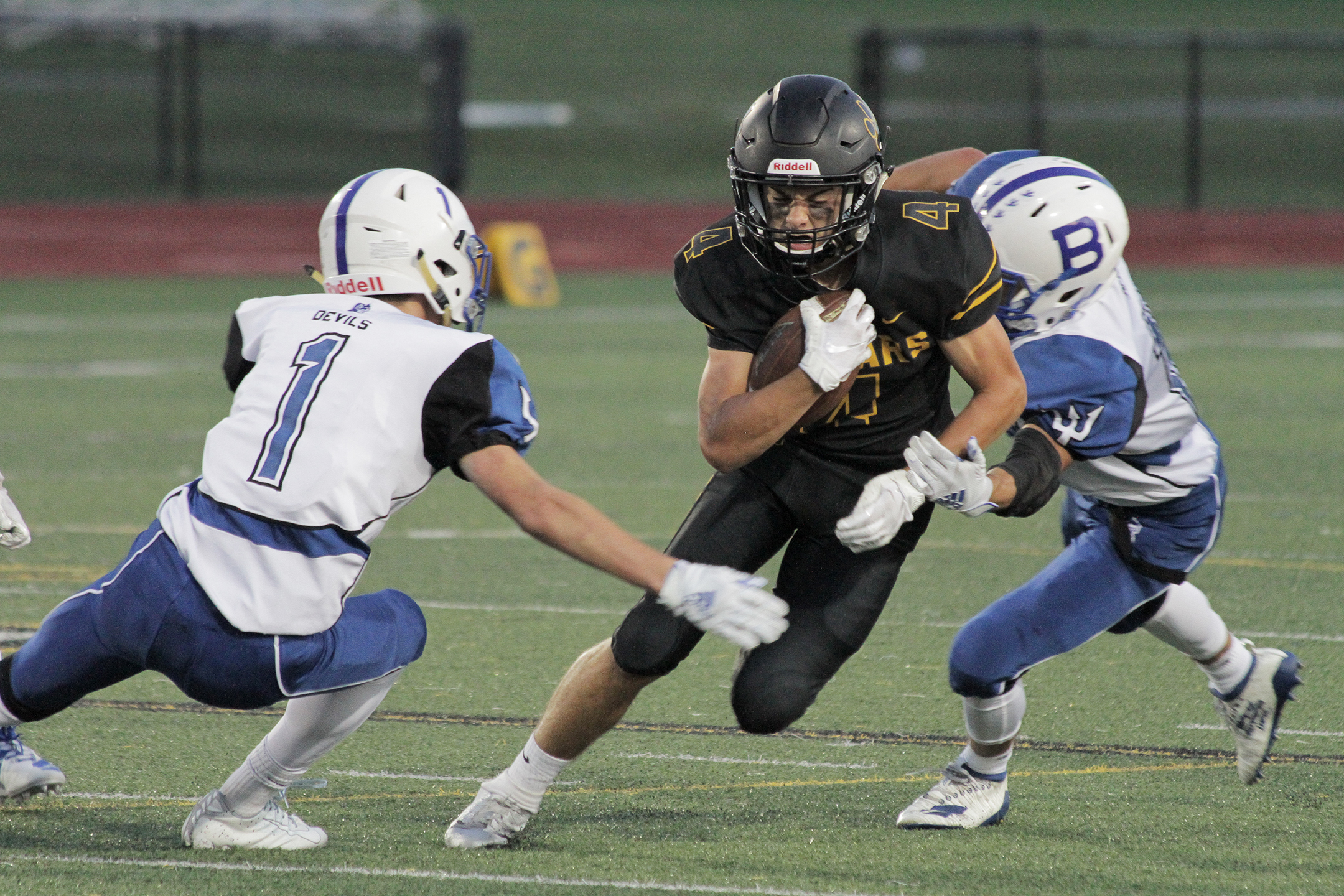 The second-seeded Batavia Blue Devils will travel to the first-seeded Honeoye Falls-Lima Cougars this Saturday for the 2020-21 Section V Class B Football Championship. Both teams enter the title contest with undefeated records and both teams won their respective Semifinal games with a similar margin of victory (30+ points).  The teams did not face one another in the regular season, but did battle during the 2019 regular season, that saw HF-L defeat Batavia by a score of 41-7. That game will have been played 589 days prior to when Saturday’s Championship kickoffs at 7:00 pm. The Sectional final will be broadcast live on the internet by Varsity Media.

Both teams are undefeated this season, but it is the Batavia Blue Devils who have more victories. Batavia was able to complete their entire regular season slate, albeit playing one exhibition game in place of their planned April 2nd battle with Geneva. This consistency was not the case for HF-L, who were unable to play two of their regular season games; one no-contest against Midlakes and one forfeit by Geneva. Despite their best efforts, the Cougars could not find an exhibition opponent in place of the forfeit.

Now speaking of consistency, senior running back Terrez Smith has been the fixture of the Batavia offense. Amassing 1,291 rushing yards and 20 rushing touchdowns through the Blue Devils’ seven games this season, Smith with be the player to watch this Saturday for Batavia. One more rushing statistic about Smith is that he is averaging a whopping 9.1 yards per carry this season and, oh by the way, he has scored three touchdowns on punt/kick returns, including two last week in the Semifinal round. HF-L will have their hands full on defense with Terrez Smith and you can probably expect the Cougars to avoid kicking the ball in his direction.

Meanwhile, the Blue Devil defense, lead by junior linebacker Kaden Marucci (61 tackles), has only allowed opponents to score an average of just over 15 points-per-game. When Batavia’s opponents do find the endzone, it’s typically on the ground with 3:1 rushing to passing touchdown allowed ratio. The Blue Devils defense will be tasked with stopping an offense very similar to their own.

A storyline that the Sentinel has mentioned many times throughout this season is Honeoye Falls-Lima’s 0-12 loss in the 2019 Section V Class B Championship to the Livonia Bulldogs. The defeat has been one of the driving forces of the Cougars’ scorched earth journey back to the title game. This year HF-L has outscored opponents 208-16, with their closest game being their 33-point victory over the Palmyra-Macedon Red Raiders in the Semifinal round of the playoffs. It’s also worth noting that the Cougars and the Blue Devils had nearly identical regular season schedules with HF-L having the slight advantage in final scores (as previously mentioned, both teams are undefeated).

Let’s start with the Cougar defense, who posted two shut outs in HF-L’s five games played. There is no one particular player who stands out, but rather the entire group plays very well as a unit, like a well-oiled machine. The defensive backs are comprised of all seniors, cornerbacks Andrew Childs and Colt Green and safeties Jacob Derby and Mason Wanzenried, and in front of them are consistent contributors, such as junior defensive lineman Mitchel Bulling, senior linebacker Patrick Lustyk, and senior defensive lineman Nolan Yates. Similar to the Batavia defense, the Cougars will be facing their toughest assignment yet; stopping, or at least slowing down, Smith and Reinhart.

In so many of their games this season, HF-L has utilized their passing attack to set-up up their ground game. Senior running back Jacob Derby may only have a modest 303 rushing yards this season, but he’s had a knack for finding the endzone, especially in goal to go situations. Derby has scored 9 rushing touchdowns and 1 receiving touchdown for the Cougars. Along with his back up Zach Meacham, Jacob Derby will hope to be running the clock out late in the 4th quarter like they have done all year.

Honeoye Falls-Lima Head Coach, John Russ, told the Sentinel’s Donna Mackenzie that “Batavia loves to run on offense and they have two good running backs. They are big and physical up front on the offensive line and we have to match that physicality. If we can get them in second-and-long and third-and-long situations and force them to throw, I think we will be okay. On Batavia’s defense, we have to figure out how they are going to try and cover our wide receivers. Batavia will certainly be a test for us.”

For Russ a Sectional Championship would be a major milestone in both his coaching and overall football career at HF-L. In his four years as a player for the Cougars, never once did HF-L finish on top, but now, as a coach, he may finally reach that pinnacle. Not only would it be the first Sectional football championship for Russ, but it would be the district’s first ever as well. Meanwhile, Batavia is in search of their fifth Sectional title, which includes their three consecutive championships from 2014 to 2016.

Before the midway point of the regular season, the expectation of many was that Batavia and HF-L were on a collision course for the Class B Final. Well, during a time when no one knew what was going to happen next, the predicted match-up occurred. And all of Section V should rejoice that they will be treated with a classic game between two gridiron stalwarts this Saturday at 7:00 pm.