HF-L Drama students learn about jury system through their show 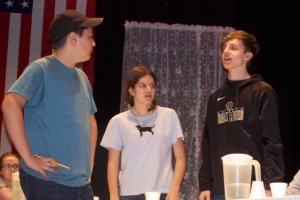 Tensions rise and tempers flare onstage this Friday and Saturday night as the Honeoye Falls-Lima High School Drama Club students present 12 Angry Jurors, the taut and riveting courtroom drama by Reginald Rose that was first produced onstage as 12 Angry Men as well as a 1957 movie.

Its title updated to allow for female actors in the play, the cast of 14 members has been rehearsing since September 23. The show takes place in the jury room following the closing arguments in a murder trial. The 12 jurors must now decide the fate of the accused, an inner-city teen who allegedly killed his father. If they all vote guilty, it means a death sentence for the teen. A lone juror holds out in the first round of voting on a verdict. As the other jurors struggle to convince the lone juror, he also struggles to get them to see that a guilty verdict might not be a slam-dunk. Tempers begin to rise during their long hours of sequestration and the personalities of the individual jurors also are revealed.

Senior Dominic Abraham plays Juror #8 (for those of you familiar with the movie, it is the Henry Fonda role). A veteran of three previous drama shows along with two high school musicals, this is the first time, he has been cast as the protagonist.

“It’s not an oddball role like I have had before,” Abraham said prior to a rehearsal last week. “In Our Town two years ago, I played the town drunk and in The Curious Savage last year, I was Jeffery, a pilot with PTSD from his war experience. This role is that of a straight-forward hero who knows that there is a life on the line and has some doubts about the prosecution’s case and thinks that maybe the teen deserves a second chance. I’ve always wanted to play a role like that.”

Abraham said that while you don’t know a lot about Juror 8 except that he is an architect with two kids, that also allows for Abraham to make the character more his own.

“I like that he is very honest and is very much an Average Joe,” Abraham stated. “I think that there are aspects of me in this role, particularly that he is average. There’s an aura about the character with his sense of duty and justice.”

Fellow senior Sydney Picciotti, who plays Juror #4, says that while this role is similar to her role as the psychiatrist in last year’s The Curious Savage, there are also differences.

Picciotti says there are aspects of her character that are challenging for her, but that she is glad to be a part of the show because she and the others have learned a lot.

“When I hear some of the jurors go off, my character tries to let it pass over and that is very difficult for me because, in real-life, that would make me upset,” she said. “I think when we started rehearsing the show, a lot of us were not familiar with what happens in a jury room and this has given us a view of how jurors do their work; it’s a window into what goes on there.”

For Abraham, the challenging part has been keeping calm when certain characters challenge his own character.

“There are certain characters in the show that real-life me couldn’t get along with, but he remains calm except for a couple of times while the real-life me would pour out my emotions,” Abraham said. “He’s very accepting of everyone around him in the jury room. He’s the “ideal American citizen.”

The show 12 Angry Jurors will be presented Friday, November 8 and Saturday, November 9 at 7:30 p.m. in the high school auditorium. Due to the subject matter and adult language in the show, parents may want to think about whether they want to bring young children to the performances. Tickets are $6 and are available at the door.