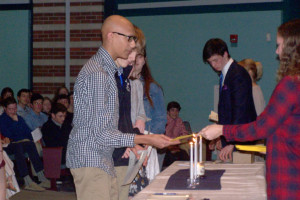 BY DONNA MACKENZIE
The 71 inductees have different personalities and different interests, some of them involved in sports, some music, some art and some all of the above, but they all share one thing in common, they were selected for induction into the Honeoye Falls-Lima National Honor Society because of their scholarship (all have a grade point average of 3.63 or better), the leadership skills they have shown, the service opportunities they have been involved in and their character. 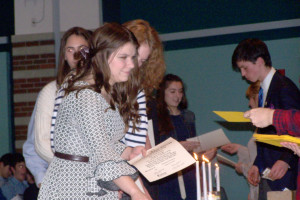 Megan Reinke is one of the new HF-L NHS members. Photo by Donna MacKenzie

Ackerman asked the new members to recite the NHS pledge and co-advisor Nicole Glavin made some closing remarks.