A Very Special “Winter on the Green”

Home A Very Special “Winter on the Green” 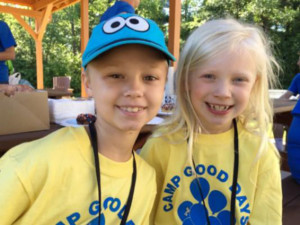 BY JENNIFER CROWLEY
Craig Winter is a spunky, tow-headed eight-year old with a charming smile and inquisitive nature. From the outside, he is the picture of health. With a full head of blonde hair, the Pittsford boy doesn’t have the stereotypical “cancer kid” appearance. But Craig has been battling an extremely rare form of cancer for the past six years. Recently his treatment was moved to Dana-Farber Cancer Institute in Boston to see if an experimental drug can stop tumor growth.

Given the cost of the ongoing travel to Boston over the coming months, friends of the family of five have organized a fundraiser to help offset the expenses the Winters are facing. The aptly named 2019 Winter on the Green will take place Saturday, January 26th, 2019 at the Mendon Golf Club.

Until Craig was diagnosed with cancer in 2012, he was a typical, high-energy toddler. Seemingly out of the blue, Craig started to have headaches. The pain would wake him out of his sleep, screaming for help. Given a set of troubling symptoms, Craig was referred to Howard Silberstein, M.D., a neurosurgeon at Golisano Children’s Hospital. A scan of his brain showed a cyst that was subsequently drained by Dr. Silberstein.

But the headaches returned.

When Craig went in for additional imaging, Dr. Silberstein asked for the spine to be included in the MRI. The results were shocking to the seasoned physician and his medical team: Craig’s spine was covered in tumors. The group was stunned by the images and even vocalized surprise that Craig was able to walk.

“Craig has what is called a disseminated neuronal glioma. What makes his case quite rare is that the tumor originated in his spine and traveled to his brain,” explained his mother, Kim. The family was connected with a new physician, David Korones, MD, a kind and gentle pediatric oncologist who inspired the family to stay positive. “The tumor luckily was slow growing so there was a bit of time to put a plan together once Dr. Korones connected with other specialists around the country to determine the best path forward since there was no treatment protocol for what Craig presented with,” Kim added.

Given that Craig was too young for radiation to his brain, and the locations of the tumors made surgery too risky, chemotherapy was the only viable solution. The early chemotherapy treatments proved to be successful in shrinking the tumors, but when the child had an allergic reaction to the drug after only three months, it was back to the drawing board.

Over the next few years, Craig would be treated with other forms of chemotherapy. The family in fact estimates he endured over 200 rounds of the harsh medicine. But the plan was working – the tumors were shrinking. The hope was that Craig’s cancer could be effectively managed until he was into his tween years when he could undergo radiation – the best chance for a cure – without damage to his developing brain.

For the most part, the various drug cocktails were helpful in keeping tumor growth at bay – yet the child faced harsh side effects. Unfortunately he also developed scoliosis from his spinal damage necessitating Craig to wear a brace to try and correct the curvature. These difficult circumstances have challenged the boy socially and academically; his parents and younger sisters Lily and Lauren (who was born prematurely during a very intense time in Craig’s treatment) of course have experienced the stress too.

For much of 2017 and into 2018, Craig’s scans were thankfully stable, giving the family some time to experience a relatively normal life. During this period Craig was off all harsh cancer treatment. In June 2018 an MRI unfortunately revealed the spinal tumors had started to grow again. The family was devastated for their son and to make matters worse, there were no treatments available through Golisano to try and stop the spread. This meant that the family would need to seek care elsewhere, in the form of a clinical trial.

Dr. Korones helped the family decide to enroll in a trial called TAK 580, a targeted therapy. Craig was the fourth patient to enroll in the phase 1 study looking at dosing safety and overall toxicity. “The first round of MRIs for the three children in the study looked promising, but of course it is unnerving to sign your child up for treatment that could have long-term ramifications that are simply unknown,” explained Kim. The family had no choice but to put their anxiety aside and enroll Craig into the trial which takes a year and many visits both in Boston, for the drug, and here at home for labwork.

Craig’s first scans following the initiation of TAK 580 happened in November and to the family’s sheer exaltation, the drug was working. The three tumors in his thoracic spine were virtually gone. The family’s joy was short-lived as Craig ended up feverish and in the ER only hours after they’d received the best news they’d heard in six years. Lab work suggested Craig was experiencing problems with enzymes that break down muscle tissue, putting him at risk for kidney, heart, and brain damage.

The hospital was able to treat the issue and get the values into a normal range, but it is not clear if the problem may emerge again as the trial moves forward. For now, both medical teams watch the youngster very closely while the family looks ahead to Craig’s ninth birthday in March. Once Craig turns ten his medical team will evaluate the role of radiation in attacking what is left of the cancer at that time. Until then, Craig will continue on with the trial in Boston with the hopes that he will continue to respond to the drug with minimal side effects.

Anyone interested in supporting the family and their expenses from the ongoing travel to Boston should mark January 26th on their calendar for a night of entertainment, food, raffles, an auction and a cash bar. Tickets are available at The Cottage in Mendon, iPadRehab in Honeyoye Falls and online at winteronthegreen.eventbrite.com.