CougarTech Wins the Team Spirit Award at the Buckeye Regional 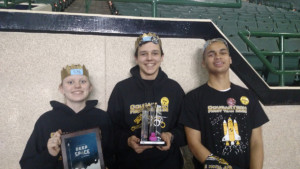 On March 27-30, HF-L’s CougarTech Robotics Team, competed at the Buckeye Regional in Cleveland Ohio, taking home the Team Spirit Award for the first time. Members of the team had been eyeing this award for several years and put a plan in action. Last year, Ellie and Joaquin created the Inspirational sub team, bringing some excitement to CourgarTech. This year, Brian Cowburn had a fantastic idea to add a duck hunt to the competition, his little plastic ducks added a surprising new element of fun to the event. With new chants, signs, some plastic ducks and tremendous enthusiasm Team 2228 brought home the win!

CougarTech will hold a team banquet in May and install next year’s elected team leads, Anna Carter and Ellie Fairchild.