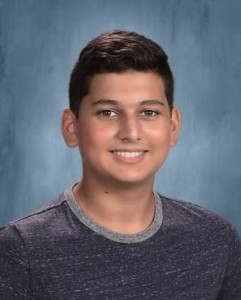 Brandon Russell, 15, is a sophomore at Honeoye Falls-Lima High School. His product, called No Touch Flush, is just as it sounds, a device that can be used to flush a toilet without using your hands

He was up against 35 other students from Young Entrepreneurs Academy chapters across the country, including seven others from New York State.

Though he had an interest in starting a business from a young age, Brandon enrolled in the Saturday morning program a year ago without a product in mind. “I was doing YEA and really struggling to find an innovation or idea,” he said.

Then, his step-father, a contractor, complained about repeatedly fixing public restroom toilet handles that people had kicked to avoid using their hands. And this was before COVID-19. “It was the light-bulb moment,” he said. He developed a simple concept of a stirrup fitted to a bungie cord to avoid any part resting on the floor.

“It was really cool to be guided through the process of starting a business. It’s really fun,” he added.

The program took Brandon through the development of a business plan, and he ultimately won $1,000 in prize money for his idea in the local competition at Finger Lakes Community College. He used the funds to buy a computer and teach himself computer-aided design (CAD) to turn his simple prototype into a more attractive design.

Now he is a finalist for the Saunders competition, which has a top prize of a $30,000 RIT scholarship along with business startup funds. Registered viewers from around the country got the opportunity to vote via text for the $2,000 cash prize People’s Choice Award. More information is on the organization’s Facebook page at www.facebook.com/yeausa<https://www.facebook.com/yeausa>.