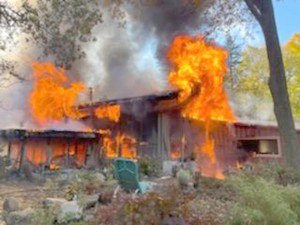 At shortly past 1PM on Oct 27th, HFFD was dispatched to the 2700 block of Rush Mendon Rd. for a reported structure fire. Upon arrival Chief Dave Hood encountered heavy smoke coming from the home. Chief Hood declared a working fire and due to the extensive fire throughout the structure, an exterior attack was implemented. Crews from the Honeoye Falls FD along with mutual aid from Mendon, Rush, East Avon and Henrietta assisted in applying master streams to extinguish the blaze. The homeowners were not harmed and there were no injuries to personnel at the scene. Thanks to the Honeoye Falls Mendon Ambulance for standing by at the scene, Lima Fire Dept for providing a fill in crew at our fire hall and the Monroe County Sheriff for their assistance.