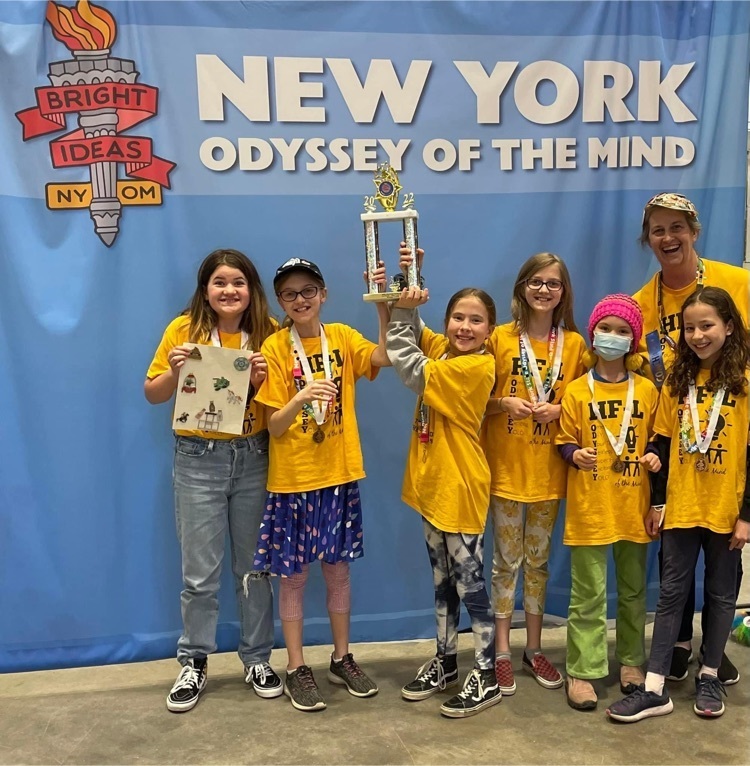 HF-L Manor School students show off their trophy from the New York State Odyssey of the Mind competition. This group is headed to the World Finals. Photo provided by Jessa Jones

An all-girls vehicle engineering team from Honeoye Falls-Lima Manor School is advancing to the national stage in the Odyssey of the Mind creative problem solving competition.

The team is a mix of 4th and 5th graders that have been working together since Lima Primary School.  The problem this year was to design and build a vehicle that could do a variety of tasks such as independently travel in a circle, pick up and transport an object, drag an object, and cross a barrier. With an 8 minute time limit, the vehicle had to release clues that the characters solve leading to the escape from a unique room and revealing the mystery behind the room with a skit—surprise, the room is actually a lighthouse!

In addition the girls had to solve a spontaneous problem and were judged on the style and creativity of their solution.  The spirit of the Odyssey of the Mind program is NO OUTSIDE ASSISTANCE—the entire solution must be the unique work of the team and their ingenuity and imagination.  The adult leaders are very proud of the students’ work this year.

After placing second at the regional competition in March, the HF-L girls moved on to State competition and finished in the top three earning the right to represent New York at the World Finals in Ames, Iowa next month.

In order to get the team and their solution to the stage in Iowa, we need to raise $12,000.  We have started a GoFundMe and will be showcasing the solution at Cougar Creations at the Budget Vote.