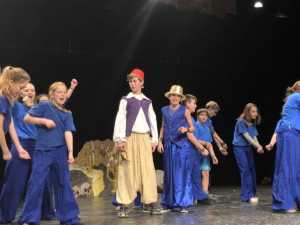 It’s a whole new world for over 60 sixth-, seventh- and eighth-grade students at Honeoye Falls-Lima Middle School as they take to the HF-L District Auditorium stage, some of them for the first time, this weekend when the school presents Disney’s Aladdin, Jr.

The musical is 60 minutes long and is based on both the 1992 Disney film and the 2014 Broadway adaptation. It presents the legendary tale of Aladdin, the lovable thief with a heart of gold. He and Jasmine and the wisecracking Genie will take the audience along on their discovery of mystical caves while also taking magic carpet rides and outwitting evil sorcerer Jafar. The musical, adapted for middle school-age performers, still includes favorite Alan Menken songs from the film such as Friend Like Me, A Whole New World and Prince Ali along with some new songs from the Broadway show.

In addition to the students onstage, many Middle School students will have key roles backstage such as in lighting, sound and stage crew.

The show is Friday, November 16 at 7 p.m. and Saturday, November 17 at 1 p.m. and 7 p.m. Tickets are $5 for the matinee performance and $8 for the evening performance. In addition, the students are hosting a food drive to benefit Foodlink and will have collection boxes for non-perishable food item donations at each performance.