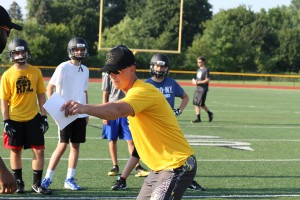 HF-L varsity football coach John Russ instructs players as the football team begins practice for the 2017 season. Turn to page 5 for an article on the HF-L football camp and information to get you ready for this season. Photo by Peter Carosa

The Honeoye Falls-Lima Varsity Football team has been busy preparing for the season, utilizing its annual football camp and optional 7-on-7 drills during the spring.

The Cougars are coming off their second consecutive season in which they only won one game. Coach John Russ is in his sixth season at the helm and is looking forward to a more successful year. Russ knew last season was going to be tough, “we were really young and it didn’t help that the teams we played had career years.” Those teams being Brighton (8-2, Section V Class A Runner-up), Greece Athena (12-1, NYS Class A Runner-Up), and Eastridge (6-3). They will be without Justis Watts, a stand-out wide receiver who holds the record for most receptions and most receiving yards both in a season and for a career, and Matt Griffith, a three-starter on the offensive line.

During the offseason, the Cougars took advantage of every opportunity they could to improve. Senior quarterback, Dylan Carey, believes the optional 7-on-7 drills during the spring not only helped him build confidence, but built the confidence of the entire squad as well. Carey added, “This year, I noticed a lot more effort being put in during 7-on-7s and a lot more guys showing up, because they want to win and they are hungry for it.” Jack Tvrdik, the senior running back/linebacker, says, “We don’t want to have another losing record and guys are starting to understand that it’s in the offseason where we put in that work that translates to wins.” Tvrdik felt the team achieved its goal of working out in the offseason. Coach Russ agreed noting, “over the summer, the weight room was obviously a point of emphasis.” The team hopes that this effort will lead to better results in the fall. Speaking of better results both Carey and Tvrdik said their biggest goal this season is to bring a Sectional Championship to HF-L.

From July 31st to August 3rd the Cougars held their annual football camp, to develop skill and abilities. The first day of practice for the team was August 14th and they are preparing for their scrimmage on August 27th. The Cougars open the 2017 season at home against Monroe on September 1st at 7:00 p.m. 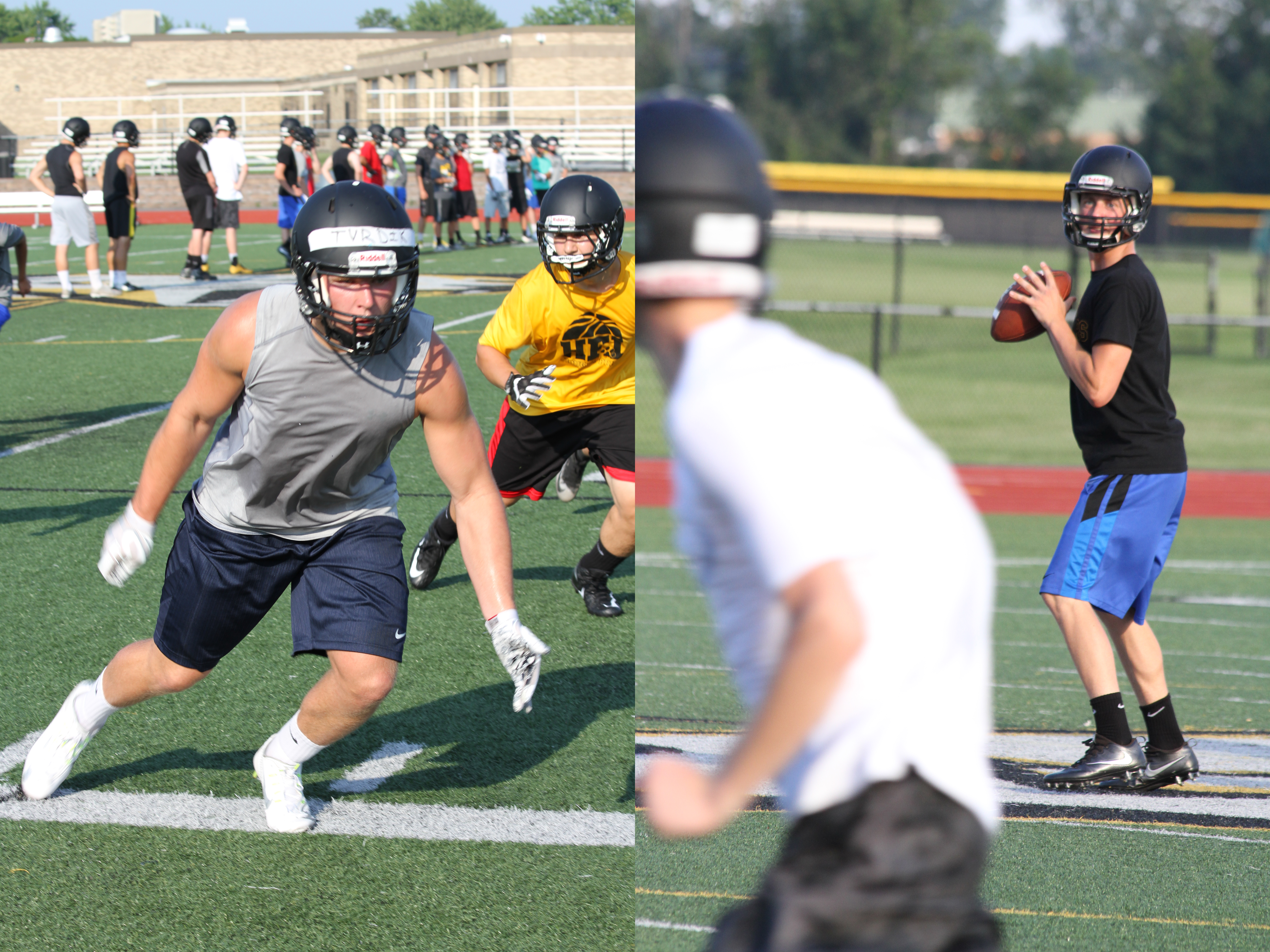 Jack Tvrdik (photo above left) and Dylan Carey (photo above right) will lead the varsity Cougars this fall. Photos by Peter Carosa

As far as the offense goes, look for quarterback Carey to use the height advantage of Owen VanNewkirk (6’3”) and Derek Childs (6’4”) when passing against opponents. Without Watts there is not a clear go-to receiver on the field. Instead, Carey will have a plethora of guys to throw the ball to. HF-L won’t just try to beat the other team in the air, but will use the ground game to keep defenses in check. Power back Tvrdik (6’0”, 230 lbs.) and speed back Henry Millard (5’10”, 150 lbs.) will be getting a majority of the touches for the Cougars. Last season, statistically, Carey was the best running back, so he adds another dimension to the offense. Between both height and depth at the receiver position, a seasoned backfield, and a mobile quarterback the HF-L offense is going to be a force to be reckoned with.

The defense for the Cougars is going to rely on the players in the tackle box. The Kosciol brothers, Josh (6’1”, 245 lbs.) and Luke (6’1”, 245 lbs.), who play linebacker and defensive line respectively will be joined by Tvrdik, Matt Worley to put the fear in the opposing offenses. I would be remiss if I didn’t mention Law Watts, a junior who is looking to be a physical defensive back that will provide the Cougars with some much needed pass defense.

After a quick look at the schedule, it’s important to note that the Cougars have a formidable list of opponents, including the previously mentioned Eastridge Lancers and Greece Athena Trojans. The good news for the Cougars is that they are going to compete in Class B for Sectionals (The district is short by one individual for Class A eligibility). That being said, the Class B schools are no less competitive, but they are not the Class A powerhouse schools that have prevented HF-L from getting anywhere near a Sectional Championship. In fact, the last time the Cougars qualified for Sectionals was the 2013 Season when they competed at the Class B level. The regular season is going to really test HF-L and if they could win a few games when October rolls around they could be very competitive for what would be the district’s first-ever Sectional Championship.