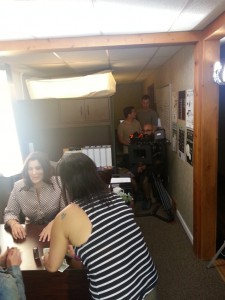 On the set in the offices of Honeoye Falls’ Nothnagle office. Seated at the desk is actress Ann Russo with Christina Kim (Hair/make-up/wardrobe) working on her appearance. At the camera in the rear is Director of Photography Mike Moghaddam (with beard) and Director Xandy Smith. The tall fellow in the back is John Ruby, lead actor and co-executive producer/creator. Photo by Chris Carosa

When Jack Kelley, 1998 HFL graduate, left Honeoye Falls to study Architecture at Yale University, little did he suspect he would one day return as a Hollywood producer. Yet, that’s precisely what he did last week, bringing his independent production to the village for some on-location shooting. Hush-hush to avoid too many onlookers, we can now reveal the inside information Jack told our publisher (who interviewed applicant Kelley on behalf of Yale in 1998).

Kelley says, “We chose the area because the story takes place in a small town in upstate NY, and since I know the area and have connections here, this seemed like the logical choice. John Ruby and I are the executive producers. We created the story together; I wrote the script; he is starring as “Luke Williams”. Other actors are Antonio Jaramillo, Kerry Knuppe, Jesiree Dizon and Ann Russo, who was playing the real estate agent.”

The budding movie mogul anticipates to have the film completed and ready to take to festivals and market the distribution rights sometime around December or January. Kelley sees it coming out in early 2017, “but that’s still TBD.”

Once everything’s in the can, expect to see the Sentinel’s own Hollywood correspondent interview with Kelley right here on the pages of your favorite hometown newspaper.