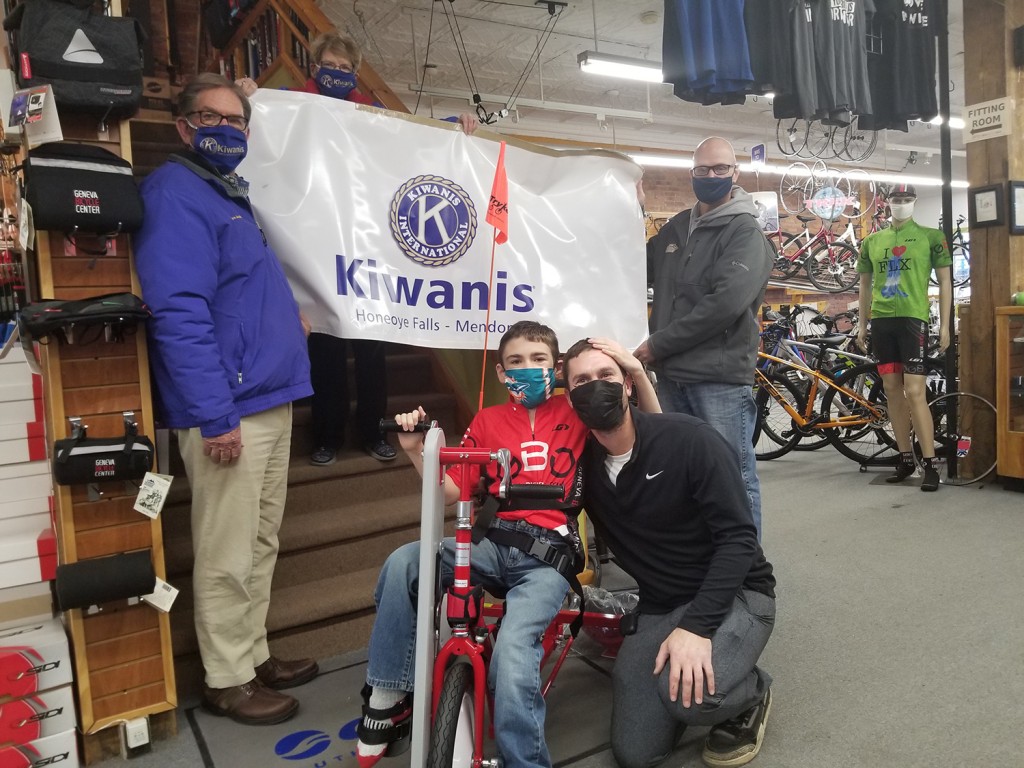 Patton Hilimire and his father Justin with Kiwanis member Mark Bounce when Patton got his specially-designed bike. Photo submitted by the Honeoye Falls-Mendon Kiwanis

The primary focus of Kiwanis is outreach to children and their families, as seen in the club motto of “One Child at a Time”. Recently, at one of the primary fundraising events for both the Honeoye Falls-Mendon and Geneva chapters, (their community Chicken BBQ events), the chapters became acquainted with Justin Hilimire, who shared that his 12-year-old son Patton has four disabilities and could no longer ride his bike, and was heartbroken over the prospect that he may never be able to do so again.

Knowing that many of the Kiwanis Clubs in the Finger Lakes Division have used Ace Automatics to provide their Chicken BBQ, the members of Kiwanis Club of Honeoye Falls-Mendon took this challenge on as a project to provide a new bike specially designed for Patton, and other children with similar disabilities. The Kiwanis Family of chapters always work together as a team. With the help of the Finger Lakes Division of Kiwanis chapters, the Kiwanis Club of Honeoye Falls-Mendon worked diligently with Ace Automatics to Patton’s dream of riding a bike once again a reality.

Patton Hilimire and his father Justin were overjoyed when the bicycle specifically designed for Patton’s disabilities was delivered just after Christmas. The Kiwanis Club of Honeoye Falls-Mendon would like to thank the other Clubs in the Finger Lakes Division: Farmington-Victor, Canandaigua, Geneva, Webster, Seneca Falls-Waterloo, and Penfield-Perinton for their help on this project. It is such a gift to be able to join together to help a child in a time of need and make amazing things happen.

Kiwanis International is a global organization of volunteers dedicated to improving the world one child and one community at a time. For more than a century, Kiwanis has created opportunities for children to be curious, safe and healthy regardless of the community in which they live. Local clubs, such as Honeoye Falls-Mendon Kiwanis, look out for our communities and the international organization takes on large-scale challenges, such as fighting disease and poverty. Service is at the heart of every Kiwanis club, no matter where in the world it is located. Members stage approximately 150,000 service projects and raise nearly US$100 million every year for communities, families, and projects. By working together, members achieve what one person cannot accomplish alone. When you give a child the chance to learn, experience, dream, grow, succeed and thrive, great things can happen.