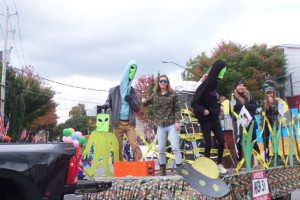 The Aliens are invading! No, actually, this is just the HF-L High School Class of 2019 (the seniors) float in the Fall Weekend parade last Saturday. Photo by Donna MacKenzie

BY DONNA MACKENZIE
Floats, bands, a thrilling last second football victory for the home team and induction of five new members into the Alumni Hall of Fame added up to another successful Fall Weekend at Honeoye Falls-Lima last Saturday (October 13).

This year’s theme for the floats in the Fall Weekend parade was Mysteries and it was interesting how that idea was spun into the floats.

The honor of being the first float in the parade went to Mendon Child Care and its UPK program, which followed behind the sheriff’s department, the local American Legion and VFW posts, Superintendent Gene Mancuso riding in the Honeoye Falls Fire Department’s old Buffalo truck and cranking its siren, and the five new inductees into the HF-L Alumni Hall of Fame. Mendon Child Care’s float was called Masquerade and featured masks and the mystery of who is behind the mask at a masquerade ball. Next up was Great Expectations in Lima’s UPK program and its float entitled I Spy. Lima Primary’s float took the theme of mystery underwater with its Mysteries of the Deep Sea with students as fish, octopuses and other aquatic life. Meanwhile, Manor School’s float soared high as it explored the Mysteries of Space. The Middle School float brought the subject matter back to terra firma (Latin for firm or solid earth) with its float built around the board game Clue. The High School freshmen float brought the famous English detective Sherlock Holmes to the streets of Honeoye Falls. The High School sophomores took Scooby Doo and the gang solving mysteries as its theme. The High School juniors went to Scotland for its mystery of the Loch Ness Monster. The High School seniors embraced the mystery of Area 51 and its Aliens for its float. 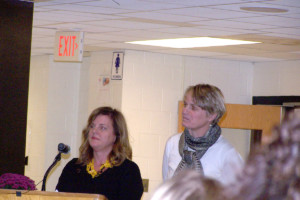 The Middle School and High School Marching Bands provided music for the large crowd that turned out, despite the quite cool temperatures. Those watching the parade were just thankful that it did not rain.

Following a thrilling football game that HF-L won 14-8 (an article on the football game is on page 4), many people gathered in the high school cafeteria to see the induction ceremony for the five new members of the Honeoye Falls-Lima High School Hall of Fame. The ceremony began with a presentation to Judy D’Hont in memory of her husband Jerry for all the work he did on the Alumni Hall of Fame committee prior to his passing away earlier this year. The five inductees were then introduced, some information about them related to the audience and then the inductees were treated to a song chosen specifically for them, relating in some way to their life’s work or avocation, by the High School Select Choir under the direction of Ken Goold.