The Mendon Foundation held an Appreciation Luncheon on Friday July 1st, 2016 for Hank Moffitt at the Freight Station located at Rochester Junction on Plains Road in the Town of Mendon. Hank was there along with his family: Sue and John Connelly, Ginny and Eric Baker, and John Moffitt. The Mendon Foundation was represented by President John Farrell and several board members and volunteers.

After giving Hank a brief tour of the Freight House, the group proceeded to the baggage cart that Hank gave to the Mendon Foundation and was subsequently restored and placed at Rochester Junction in 2013. Here Hank was presented framed photos showing a variety of ways the baggage cart has been used over the past year: site of Girl Scout Troop meeting, respite for some bikers and the back drop for bachelor wedding photos for the Cory McGee – Michaela Richards wedding. The legacy of the baggage cart lives on. 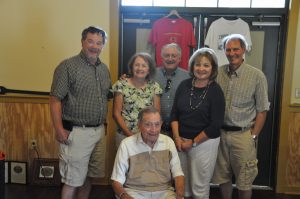 Then back to the Freight House for a light lunch before turning the microphone over to Hank where he told stories from his past: his flying days in the Army Air Corp during WWII, seeing Amelia Earhart in the Leroy Airport, his days at Rochester Junction with his Uncle Seymour Davis who was the operator of the interlocking tower and several other stories. The attendants of the luncheon were well entertained by Hank’s reminisces.