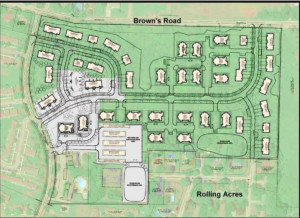 A rendering of the planned Clearview Farms development project. The initial phase of the project is highlighted in the light gray color to the left. From Town of Wheatland website

BY JENNIFER CROWLEY
Earlier this spring Mark IV Enterprises, owner of the Clearview Farms apartment complex off of Scottsville Road, approached the Town of Wheatland about plans to construct new residential development on land the company owns adjacent to the existing Clearview complex.

Mark IV Enterprises describes the project as providing for “updated versions of residential apartment and townhome living.” Plans for the 30-acre development that will be located on Browns Road just outside of the Scottsville village limits include:

One June 4th, the Town of Wheatland Planning Board held a Public Meeting for comments on the proposed plans. Despite fairly active social media chatter on the subject of the new development, both pro and con, less than 15 residents spoke out on the plan. Of those who did, primarily residents of Browns Road and homeowners on Cedar Street in the Rolling Acres Subdivision (which abuts the new development and may require the installation of a crash gate for emergency vehicle access), two core messages emerged:

Even residents that spoke in favor of the project given the potential for economic growth expressed strong desire that attention be given to the aesthetics of the development given the natural beauty that will be impacted.

Clearview Farms, which dates back to the 1970s, was lauded by Mark IV Enterprises as a success citing many long-term residents, though at least one neighboring homeowner expressed concern over the potential for increased crime that the addition of several hundred people into a quiet rural setting could bring. Trying to mitigate those worries, Mark IV reiterated that the residences will be targeted at RIT students, empty nesters, and young families interested in quiet living.

As for the proposed look and feel, the Lehigh Park Luxury Rental Residences in Henrietta was suggested as a model for what the residences will resemble when complete. The Townhouse style units reportedly will not have steps so older adults interested in the complex will not have to contend with ambulatory challenges. Bathrooms will similarly be designed with accessibility in mind as well (i.e., step-in showers).

Economically, this type of development is likely to bring growth to an area that has largely been flat in its population due to a general lack or shortage of residential development and policies that spur such development. In addition to hopefully enhancing town and village tax revenues, the addition of 200+ families into the Wheatland-Chili school district should deliver a boost to enrollment and activity participation. However questions remain around traffic implications and the effects of increased class size and likely student transiency on the school system, the smallest in Monroe County. Developers reinforced that for now, the residences will be available as rentals, but that they may have interest in converting the complex to a “Homeowners Association” in the future.

The Town of Wheatland Planning Board is currently leading an environmental review of the project under the New York State Environmental Quality Review Act (SEQRA) stipulation that requires municipalities to reflect on environmental impacts when considering social and/or economic factors around such development opportunities. As for one stated community benefit, town officials relayed their expectation that new sidewalks along Robert Quigley Drive and along Scottsville Road up to North Road will be part of the project. A future dog park in complex green space was also referenced by Mark IV representatives as a perk that non-Clearview residents can also take advantage of.

Once ground is broken, it will take about 18-months to complete the first phase of construction which will be comprised of five two-story apartment buildings, the self-storage units, sidewalks and the first retention pond. Future meetings and hearings on this development are likely; taxpayers and neighbors interested in learning more should review the project summary at the Town of Wheatland website, and look for meeting notices both online and posted near the Clearview location on Browns Road.