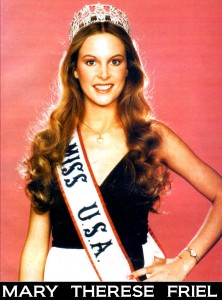 BY DEB AND TIM SMITH
Mendon Gal Wears Crown in Latest Tom Cruise Movie Well, sort of . . . Please allow us to explain. Tom Cruise’s latest theatrical release was the film American Made which came out in September of 2017. The film, which was set in 1979, was based upon the life of Barry Seal, a former TWA pilot who became an agent of the CIA, then a drug smuggler, and finally an informant for the DEA. The significant piece of information in this synopsis which leads to the Mendon connection is the 1979 time setting.

For our good friend and Mendon resident, Mary Therese Friel, 1979 was a very good year. Why, you ask?  Well among other things she won the Miss U.S.A. pageant and went on to finish 6th in the Miss Universe pageant which was held in Perth, Australia; the first time the pageant had ever been held in the southern hemisphere. Mary Therese used her pageantry success as a springboard to a lifetime of achievements in a diverse range of activities. That full story is in the works and one that we’ll share somewhere down the road.

ESTABLISHING THE SETTING ~ Here’s the movie connection. In the opening sequence of American Made, the director establishes the time setting by using a compilation of iconic video snippets from 1979. One of the snippets used is Mary Therese enjoying her crowning moment and traditional walk as the new Miss U.S.A. An irony in how this story plays out is that Mary Therese was never told that she would appear in the movie. The rights to the video footage are owned by the pageant, so they are not obligated to share release information with any of the contestants, nor are there any royalties. In this case, the check is not in the mail.

When we were talking to Mary Therese and her husband Kent about this, they shared with us the fact that they, on a few occasions, had actually planned on going to see the movie at the theater when it was released. However, for various reasons, things never worked out.  How funny would that have been if they’d gone? Imagine yourself settling into your comfy movie seat to enjoy the latest Tom Cruise movie and you actually appear in the film before he does!

SEEING YOURSELF IN A MOVIE ~ Mary Therese was very animated as she described what her hypothetical reaction to the above scenario might have been. Would she have been calm, cool, and collected? Not likely. That’s Kent’s job. She would have put her hands to her face, leaned over and excitedly whispered, “Oh my Gosh, Kent, is that me? Is that me?”

But as reality played out, the theatrical release of American Made managed to come and go without the Friels ever realizing Mary Therese was in the film. The event which eventually led to a torrent of contacts was when the movie became available through home video outlets.

THE REVELATION ~ The first Mary Therese heard about it was when a friend called and excitedly told her that she had just seen her in the Tom Cruise movie. It was all so spontaneous and unexpected that there was some confusion about exactly what was being conveyed in the phone call. Mary Therese, somewhat perplexed, turned to Kent and asked, “Did I ever do anything with Tom Cruise?” Now that might seem like an odd question for anyone to have to ask, but with the life Mary Therese has led, it’s not that odd at all.

Case in point . . . when we did our first interview with the Friels to write this article and prepare for our more in depth follow up, we generated the following list of people with whom the Friels have hobnobbed over the years: Frank Sinatra, Mick Jagger, Elton John, the Beach Boys, Ringo Starr, Julio Iglesias, Cher, Reggie Jackson and Muhammad Ali. How’s that for starters?!

A LOCAL TREASURE ~ Subsequent phone calls and text messages eventually connected the dots and put Mary Therese in a position to be able to say, “Now I have bragging rights. I’m in a movie with Tom Cruise!” So the Friel experience continues to be one of constantly pushing the envelope of excitement.

Using one modern day barometer of success, she must have made it big because she has her own Wikipedia entry. It is a treasure that we have living here in our midst in Mendon someone who has been so impactful on the world stage.

Occasionally in life, as well as journalism, the stars surrealistically seem to align. The night before our deadline to turn this piece in, news was released that Mary Therese Friel has been named as an honoree for the prestigious “W” Award which is presented annually by the Rochester Women’s Network. Sometimes we work hard on a “teaser” to connect one week’s article to the next and sometimes, like a falling star, they just drop out of the sky.