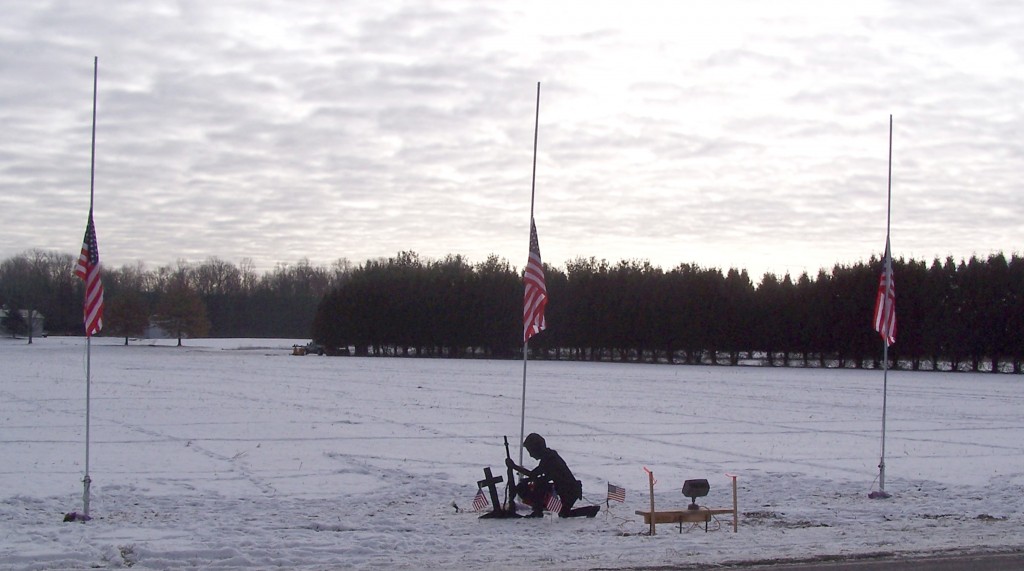 This memorial to Christian Koch, Daniel Prial and Steven Skoda from C Company of the 1st Battalion, 171st General Support Aviation Battalion at the site of the crash of the New York Army National Guard helicopter was put up by Marvin Vahue, Mark Winship, Cory Gates and Jerry Fox. Photo by Donna MacKenzie

Residents of Mendon are used to helicopters flying in the sky above them as they are often in the flight path of Mercy Flight choppers flying patients to Strong Memorial Hospital or military helicopters from the Army Aviation Support facility at the Rochester International Airport conducting training missions. However, things just didn’t seem right on the night of January 20.

Michelle Naylor, who lives in a subdivision on a hill off Bulls Saw Mill Road, heard the helicopter and saw the crash. Between 6:10 and 6:15 p.m., she and her son, Ben, heard a helicopter. She said it was flying low and didn’t sound quite right.

“I looked out the window and it was coming fast from the northwest and then I watched it head southeast from my patio,” she said. “I didn’t think anything of it since we see Mercy Flight and the military helicopters frequently, but it did sound louder than normal and was going really fast.”

About 20 minutes later, Naylor heard and saw a helicopter again.

“I was on the patio, covering our grill, and heard the helicopter again,” she said. “I looked up and it was southeast of us. It was really low and sounded like it was struggling. I watched it about 10-20 seconds; it was like it was hovering and then it literally dropped straight down to the ground behind some trees. I called out to my husband Dave and my son and while I was telling them, we heard two loud, horrific explosions. We saw smoke and called 911. It was 6:32 p.m.”

At about the same time, Greg Keyes, who lives on Taylor Road about a half-mile to three-quarters of a mile northeast of the crash site, was taking groceries from his car into his home.

“I heard a helicopter in the distance but didn’t see it,” Keyes said. “We see the Blackhawks go over often and you get used to hearing them. At first, this one sounded okay but then it got louder and the sound was like metal being shredded like ball bearings or something. Then, I heard an explosion. I came in and told my wife and we both went outside and it was quiet until the fire whistle went off.”

When asked if she would describe the sound as metal being shredded, Naylor said yes. After she hung up with the 911 operator, the Naylors got in the car and drove to the scene.

“I’m a nurse and my thought was if there was anything I could do, I would,” said Naylor in a trembling voice before pausing during our conversation. “I knew there probably wasn’t anything I could do; and once we got to the scene and saw the helicopter, I knew there wasn’t. When we got there, there were already some emergency vehicles, I stayed in the car while Dave and Ben went over. They came back with a deputy and I told him what I had seen.”

Honeoye Falls-Lima Varsity Nordic Ski teams coach Bernie Gardner, who lives in the area, was not home at the time due to a nordic ski meet, but was texted by his brother, who said that the crash shook his house.

“The debris really flew with a lot of small parts,” said Vahue, who said the field was bare because the soybeans planted there had been harvested and the leftovers of the crop turned under into the ground. “Part of the rotor of the chopper flew off and cut some limbs off a tree. There was also a lot of fuel on the ground. It was incredible that it didn’t ignite.”

After the fire was out, firefighters worked with the Monroe County Sheriff’s Department and New York State Police to secure the scene and mark where parts of the helicopter were found. The 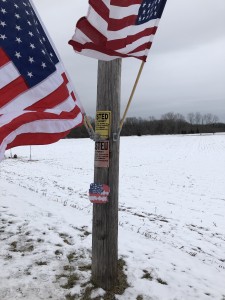 These American Flags on the phone pole were put up by a friend of Steven Skoda’s. The small flag underneath was done by a local eight-year-old child. Photo by Donna MacKenzie

bodies of the three soldiers were removed on Thursday with an honor guard from various law enforcement agencies heading the procession. Firefighters at the scene stood at attention and residents along the procession route also honored the three soldiers. Investigators from United States Army along with investigators from the Federal Aviation Administration took over investigation of the crash after arriving on Friday. West Bloomfield Road was closed to traffic, except for residents of the stretch between Cheese Factory Road and Boughton Hill Road, from Wednesday night through Sunday evening. The road was reopened to traffic late Sunday night after the Army said it had cleared the debris field and no longer needed the area secure.

In a statement, Monroe County Sheriff Todd Baxter thanked homeowners in the area for their understanding and also thanked people who had stopped with food or drink for the deputies who were shutting off the traffic at the Boughton Hill Road and Cheese Factory Road intersections.

Vahue, along with Mark Winship, Cory Gates and Jerry Fox put U.S. flags in the field to honor the soldiers and flags placed on phone poles in front of the crash site were put there by a friend of Skoda’s. An eight-year-old child made a flag that was also on one of the telephone poles.