Miller Lanes is not spared by Covid-19

Home Miller Lanes is not spared by Covid-19 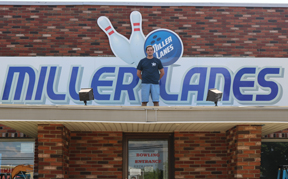 Miller Lanes Owner Brad Miller is on top of his business. Photo by Margaux Murray

Miller Lanes was thriving in February and early March with bowling leagues in full swing, but the sound of bowling balls striking pins came to a halt when Covid-19 forced New York State into locking down all but essential businesses.

Although many businesses have been allowed to re-open, the state has not set a timetable for re-opening bowling alleys and owner Brad Miller says he cannot stay in business. The venerable Honeoye Falls bowling alley is officially closing on August 1.

Miller, who bought the former Brongo Bowl in February 2015, announced the closing in a Facebook post on the HF-L-Mendon Community Facebook page on July 21. He wrote “It’s with a heavy heart to have to write this post. As of August 1, Miller Lanes will be officially closing due to Covid-19. Unfortunately, without a timetable STILL from our government to be able to operate business, we can no longer stay in business. The building is up for sale. We would like to thank everybody from the bottom of our hearts for the support the last five years to continue a business and staple in this community that has meant so much to myself and the rest of our staff. THANK YOU! This has been a great community to grow up in and at 22 years old to have the opportunity I did for the last five years I will forever cherish but we will all get through this together! Please, if you’d like to leave your favorite memory or a funny story about Miller Lanes in the comments our staff would love to hear them! Again thank you all! Don’t worry be happy because it’s another day in paradise! Thank you, Brad Miller.”

In an August 25, 2016 article in The Sentinel by Margaux Murray, Miller recounted how he became involved in the bowling alley at a young age; the bus dropped him off at Brongo Bowl after school when his parents were working, and often times, Tom Brongo would give him money to spend in the arcade.

“I’ve worked here since I was sixteen, I grew up here; Tom Brongo was my dad’s best man, so before I was even born, I was involved,” Miller said.

A for-sale sign is in front of the building with Tom Jamison being the realtor.

Known for many years as Brongo Bowl, Miller bought the bowling alley in 2015 after the passing of Tom Brongo. Generations of bowlers have frequented the lanes to meet for fun and food in the village as before it was known as Brongo Bowl, it was called the Sportacade. It was not only a place to go for bowling, however, as it also hosted Horseshoe Leagues in an area behind the building. Honeoye Falls-Lima physical education classes have used the lanes for the curriculum’s bowling unit. Countless birthday parties and parties after student productions in HF-L and events for HF-L athletic teams have been held there and were recounted fondly following Miller’s post.

“On behalf of all the Youth Cougars cheerleaders and football players over the last many years, thank you for always hosting us on Fall Weekend parade day…we will miss you,” posted Mike Kamm.

Middle School music teacher Barb DeMartinis Salter posted: “You will be truly missed in our community. Many middle school kids who performed in our school shows would celebrate at Miller Lanes for our cast/crew party. So sorry to hear this news.”

A message on the business’ phone says that the business, which has a bar/restaurant inside it, will be open from 6-9 p.m. on July 29 and July 30 and from 4-8 p.m. on July 31. League bowlers who need to gather their belongings that were still in the building when bowling leagues were shut down in March can meet Jason Kime at the lanes July 29-31 from noon to 8 p.m. to pick up those items.