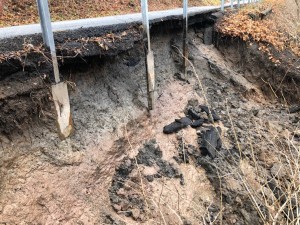 In the photo above, the undermining of the road on Hyde Park is clearly visible after a water main break caused a collapse and washout of soil underneath the road. The photo below shows part of the section of road affected by the washout as the road leads up the hill toward East Street and showing why village officials want people to stay out of the area. Both photos by Mayor Rick Milne

Honeoye Falls Village Mayor Rick Milne is requesting that people refrain from walking or driving down Hyde Park to satisfy their curiosity about a recent water main break there that has caused a portion of the road and embankment to wash out.

The water main break was first noticed during the day on Friday, December 4 when water was found on the roadway. Village officials called Monroe County Water Authority (MCWA), whose crews weren’t able to respond right away. It was only after a resident called at about 11 p.m. at night to report that their yard was flooding, that MCWA crews responded along with village officials. It was at that time that the collapse and washout on creek side of the road was discovered.

“The water main that broke is on the opposite side of the road, not on creek side,” said Mayor Milne. “We don’t know how long the pipe had been leaking and, we assume, there was a small hole in the side of the pipe. The water saturated the ground under the road so that it finally burst 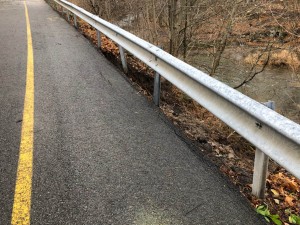 through to the side of the road by the creek and caused some of the embankment and pavement to wash out.”

Milne said that the section of road involved is on the southern end of Hyde Park about 15-20 feet beyond the driveway of the resident at the top of the hill near East Street. The area stretches for about 40 to 100 feet. He stated that the pipe may be pre-1950 vintage, based on records, although the pipe did have a plastic pipe slid inside it back in the late 1990s or early 2000s.

“In 2002, the water authority took responsibility for all the pipes, but this pipe was not on their watch list as far as posing any potential problems,” Milne said.

Water crews took care of the initial break, but the village and water authority personnel are now trying to figure out how to get the road and embankment repaired. In the meantime, the road has been barricaded off and is open to local traffic and Hyde Park residents ONLY. 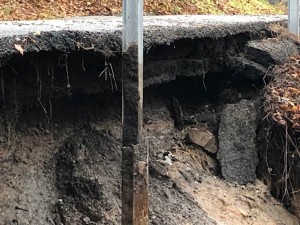 This photo shows an even better angle of how much the water main break caused the soil underneath the road on Hyde Park to wash out and how much of the pavement is in danger of collapsing. Honeoye Falls Mayor Rick Milne is asking residents to refrain from walking or driving on Hyde Park, which is open only to its residents. Photo by Mayor Rick Milne

“We have put additional barricades around the collapse/washout area, but we are asking people not to walk or drive in that area as we cannot guarantee that the road won’t continue to deteriorate and perhaps collapse even more,” Milne said. “We know Hyde Park is a popular place for people to walk with their children or their pets; however, there are cracks in the road and we don’t know what kind of weight or weather may cause the road to give way completely.”

Milne said that this will not be a short-term process. He said engineers are beginning to look at the extent of the damage, but that could take months along with the determination of who will be responsible for the work to be completed and who is responsible financially. Initial discussions are leading village officials to think in excess of $1 million dollars, particularly if the creek bank is not able to be filled in and a retaining wall has to be constructed. He further stated that he has already reached out to elected officials at the county, state and federal levels for potential funding, should the need arise. However, he reiterated that the main priority right now is that of safety.

“We really urge residents to stay away from the area; we don’t want someone driving or walking on that road and then it suddenly gives way,” he said.