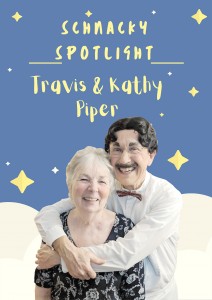 BY ANDREA BORRELLI
In 1981, new parishioners Kathy and Travis Piper invited Monsignor Schnacky to dinner. The Pipers had met through a community theater called the Penfield Players. During the evening, it was mentioned that perhaps, someday, it might be fun to put on a play at St. Catherine’s.

The next weekend, a brief item appeared in the bulletin: “Travis and Kathy Piper have volunteered to put on a play here at St. Catherine’s”. When asked about the write-up, Monsignor smiled and said “Save me a small part!” … The rest is history.

Because the pair had never started their own theater group before, they decided to go with melodrama style shows because they have built in mistakes. Kathy Piper directed over 25 shows, and Travis directed 17 over the years. Travis admits, she had more of a knack for all the details, where he was a big picture guy.

“It didn’t matter how much experience you had, or what your background was, she made you feel comfortable in the role she had given you. She just made everyone feel comfortable and happy, rehearsals were joyful. I can’t say that I’ve ever been around someone that makes you feel so welcome as Kathy did.” said group member Christine Radi. 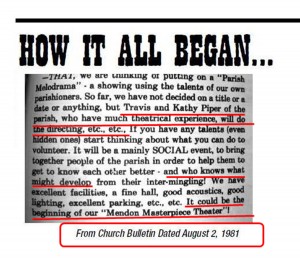 Did you know…each year, nearly 100 people get involved with our productions? Some are parishioners, some are non-Catholics, some are friends of friends. All are people interested in having fun and meeting new people. Rehearsals take place during the winter months which really makes the winter fly by. The Schnackys write some of their own material and are always looking for new ideas.

One year, they put on three shows to raise enough money to purchase the church’s connecting wing from the main church building to the community center.

The Schnackys have been together for forty years thanks to Travis and Kathy Piper and the welcoming culture they have created with the players. Without these two lovely people, we wouldn’t have been able to have 40 years of fun and excitement! Thank you, Kathy and Travis. We love you!