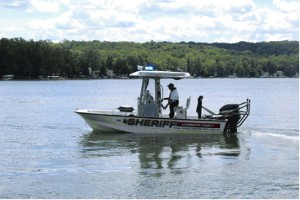 The primary goal of the Marine Patrol Unit is the safety of the citizens who use Conesus Lake for recreational boating and fishing.  This is accomplished primarily by having a notable and visible presence daily with a goal to have all boaters following the rules of the water safely.  This is handled through boater inspections, verbal and written warnings, and when necessary, enforcement.
A review of vessel stops revealed that most are for minor violations, such as improperly lighted boats or not having the correct equipment on board.  Many families this year are first time boaters and may not be aware of some of the regulations.  The deputies assist with many questions, work diligently to educate and have the “NYS Safe Boater Pamphlet” available for anyone.

The Livingston County Sheriff’s Office Marine Patrol Unit has been active during this summer.  The 2020 boating season started out with uncertainty and quite a lot of apprehension on what the summer season would be like.  The unit was forced to cancel two safe boaters courses early in the year due to the COVID-19 shut down.  As an alternative, the boating course was offered online.

Memorial Day celebrations were cancelled throughout the region, and as a result, Conesus Lake saw an uptick in the early part of the boating season.  The first boating mishap resulted when a man fell overboard, and was rescued by Livonia Fire department personnel.  Sergeant Smith and Deputy Young responded and determined that the gentleman had on the correct coast guard approved PFD, which kept him safely afloat until help could arrive.

Through the second week of July 2020, the Marine Unit has handled 340 calls for service. The Marine Unit handled 295 calls for the entire 2019 boating season. There has been an increase in the number of vessel stops and inspections in 2020.  This increase is believed to be in direct response to an increase in boaters and families taking advantage of the natural safe distancing that boating activities encourage.  While speaking with the marinas on Conesus Lake, it was learned that there was also an increase in boat sales this year.  It would appear that families are spending their vacation time and money closer to home.

The Marine Patrol Unit works closely with the Conesus Lake Association (CLA).  They are instrumental through their website in helping to return lost and found property to the respective owners.  The CLA did cancel the annual Lake of Fire Celebration on July 3rd this year.  While the gatherings that did occur were subdued and respective of the social distancing guidelines, many residents lit their own flares and the Lake was lit up in celebration.