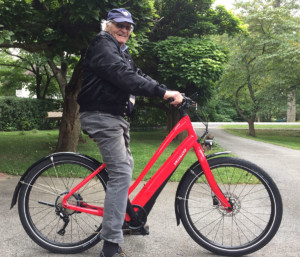 Bill Clune on his bike. Photo by Jennifer Crowley

BY JENNIFER CROWLEY
Anyone walking or driving around Scottsville these days might be distracted by a dapper older man riding a red electric bicycle (at speed) (without a helmet). The man’s name is Bill Clune. The red bike was a birthday present to himself, an upgrade for an older model that kept the 93-year-old motoring around the village for many years.

While it’s very nice to see a nonagenarian that has retained both the passion and ability for physical pursuits, that’s not the point of this article. And the fact that Clune was born in Scottsville back in 1925 and today lives next to the house he grew up in which his father had built? Merely interesting.

Seeing Clune zoom by on his bike, one would never think, “There goes the first male supermodel.” But that’s precisely who he is. And that’s why Clune is a very fascinating man.

Clune is happy to talk about the path that ultimately led him to becoming the face of Marlboro cigarettes. Yes, a Marlboro Man. And the first. With every new piece of backstory the witty Clune reveals it becomes more and more evident he had been destined for the notoriety he found in front of the camera during the 1950s and 1960s. Case in point: Clune’s parents. His father, Henry, was a well-known journalist with the Rochester Democrat & Chronicle. His “Seen & Heard” columns that were written over many decades detail the flavor of city life. Clune’s mother Charlotte was a world record holder in swimming; she competed in the 1920 Antwerp Summer Olympics.

As a child, Clune’s father was hopeful that his lanky son might have a future as a sprinter. To hear Clune tell it, that was not his dream, but he played along. The father and son would travel for various races. This was Bill’s first exposure to Manhattan, a city that he still happily encourages anyone to move to.

During the high school years he struggled academically despite being admitted to prestigious preparatory schools. He never finished his education, but it certainly was not a hindrance given his intense work ethic and charm. He was hungry and would take any job he could. During these times some of his jobs included delivering freezers for Sears Roebuck, chauffeuring, and working in radio. The radio job ended abruptly however when a hot microphone during a religious broadcast picked up Clune saying the word “hell” – and not in a biblical sense.

“Getting fired from that was the best thing that ever happened to me. It set me on my way to find my fortune,” Clune said with a laugh. Finding himself with no job in Rochester, he struck off to Manhattan with $100 in his pocket. A friend of his mother’s put him in touch with an employment agency that placed cleaners, butlers, chauffeurs and so forth with families seeking such individuals. It was through this agency that Clune landed a chauffeur job with Raymond Loewy, a famed industrial designer. “He worked designing Studebakers. His own car, the one I drove, was custom designed for Mr. Loewy. The grill was made of bronze. I loved that car. I’d drive it and people would swarm trying to get a closer look.”

Shortly after landing the chauffeuring gig, a friend asked Clune if he’d ever thought about modeling. Clune, game for anything, had some test photos taken and it wasn’t long before he got a call saying he had a job: posing as a rapist for a True Detective magazine article.

His major break came when Stetson Hat hired him after seeing a photo of the chiseled Clune wearing a fedora. And from here Clune’s modeling career gained nothing but momentum. The only challenge he encountered was that the healthy lifestyle he adopted when training as a runner made certain campaigns – cigarettes in particular – difficult to land as he never smoked (or drank, he adds). Once he decided he wanted the work badly enough, he came back to Scottsville one weekend and forced himself to learn how to smoke. He hated it, but it became the gamechanger.

The stories Clune tells about his heyday in the ad world are all colored with fine detail – the address of the agency, the design of the building, the name of a secretary. Describing his words as Mad Men-esque doesn’t even begin to cut it. “My TV agent was connected with all of the Madison Avenue ad agencies. Marlboro actually came to us and when I walked in they just said, ‘There is our Marlboro Man’ and from here they all eventually hired me — Winston. Viceroy. Pal Mall. I did a Kool ad with Tippi Hedren before she was a movie star.” After sharing this story Clune quietly reflects on how he was lucky to never enjoy smoking given the cancer deaths of several Marlboro models that came after him.

During his career high point Clune was the highest paid male model in America. He worked pitching airlines, coffee, alcohol, cologne – you name it. Another model experiencing similar success at the time was Wyatt Cooper, the late father of news reporter Anderson Cooper. Wyatt and Bill eventually signed with the famous Ford Models, likely the first two men to do so. He said from here it felt like the work never stopped coming in.

These days Clune enjoys a quiet life in Scottsville though still keeps current with what is happening in the worlds of fashion and cars, two of his greatest passions. He stays fit by riding his bike and has a tremendously busy social life hallmarked by graces that are practically non-existent these days. His days are truly enviable. What’s his secret?

Every time he’s asked, he replies only with a big smile and hearty laugh. So there you have it.