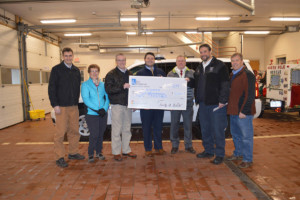 During this season of giving, Southern Hills Insurance Agency and Erie Insurance teamed up to make a donation to our community. On December 12th the two companies came together to give a combined charitable donation of $2000 to the Honeoye Falls-Mendon Volunteer Ambulance and the Honeoye Falls Fire Department.

John Hefferon, owner of Southern Hills Insurance, was quoted as saying, “These are vital emergency services and we can’t take this for granted. We count on these folks to be there for us and in turn they should be able to rely on us for support”.