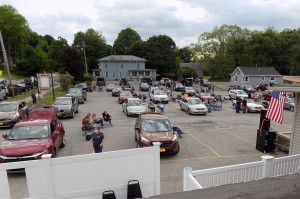 Here’s what it looked like during the first drive-in concert in June. This was the event cited by the state for violations. Photo by Deb Smith

BY DEB AND TIM SMITH
When Jim Shelly went to his mailbox on Monday, July 20 he found an envelope from the New York State Liquor Authority. It wasn’t a Christmas card. And it wasn’t just a run-of-the-mill, business-as-usual mailing that bars and restaurants typically get from the NYSLA. It was a letter citing Shelly’s Fanatics Pub in Lima for three infractions of state regulations which was accompanied by a $2,500 fine. Yikes!

The whole brouhaha was in regard to the outdoor drive-in concert series which Shelly initiated in May at his Fanatics Pub on West Main Street in Lima. We have reported on that a few times already. In the May 21 issue of the Sentinel, we wrote about the upcoming opening which was to feature a Lima favorite son, bluesman Steve Grills.

We attended that event and wrote about it in the June 11 Sentinel issue, commenting about the wonderful crowd and also covering all the rules and regulations in place. There were very specific protocol lists published regarding what could and could not be done. We observed the crowd and staff steadfastly adhering to these rules. The concert series had been continuing with astounding musical success and community support till last week.

Shelly had spent months dealing with the state bureaucracy to establish ground rules that he understood to meet the state standards. Suddenly, somehow, those standards seemed to have changed. Using the empty parking lot beside Fanatics, which used to be the parking lot for the now-closed grocery store, the arrangement in place was that cars would park in every other parking spot and have the vacant spot adjacent to the driver’s side door as the socially distanced area for the group within each vehicle.

According to the understanding that Shelly had taken away from his work with the state, that scenario would constitute having multiple gatherings of 2-6 people (whatever would fit in a carload). At that point, in Phase 2 of the reopening, the state was allowing gatherings of less than 10 people which seemed to accurately describe the reality of what we witnessed that night.

The state’s interpretation, however, was that this was one gathering and everyone in the parking lot was counted as part of that single gathering. The setup for that opening night (which was the one Fanatics was eventually cited for) allowed for 37 cars to be parked in the lot. So obviously the total number of people exceeded 50.

Lima Mayor John Correll described the crux of the issue as being that, “After many calls with NYSLA [their representative] couldn’t tell him why drive in movies were ok and not concerts.” Mayor Correll, Lima Supervisor Mike Falk, and State Senator Pat Gallivan are all in the process of trying to intervene on Shelly’s behalf. We’ll keep you advised in regard to how this all turns out.

The third infraction Shelly incurred was for not having his establishment defined as a venue for “music and dancing” when he originally applied for his liquor license 12 years ago. He admits he is guilty on this one, but it all kind of leads to what Shelly told us was what he felt was the most important point to be taken from this entire affair.

We’ll get to that next, but here’s the explanation for how Fanatics came to be in violation on infraction #3. Jim Shelly has been in the restaurant business for decades and operated multiple other establishments prior to Fanatics. Those were all pretty much just your basic wings & pizza joints.

When he opened Fanatics it started the same way. It was a pizzeria with a basic pub & grill menu including burgers, wings, chicken fingers, etc. Over the past decade, Shelly has become a very successful music promoter organizing shows at various venues, including Fanatics. So gradually, over time, his establishment evolved into one where the music became more important and the fact that wasn’t indicated on his original liquor license was a problem he didn’t even realize existed.

It wasn’t like he was trying to get away with something. The cost of the license is the same whether you have “music and dancing” or not. And there is also no cost to amend the license, a process which Shelly has already initiated.

Returning to the topic of what Shelly felt was the most important takeaway from this whole sordid affair he said, “In these difficult times where businesses are struggling to survive and the rules seem to be changing on an almost daily basis, I wish the state were hiring more people to go out and educate businesses to assist compliance with the rules, rather than hiring more people to go out and bust businesses before they even know something might be wrong.”

He went on to say, “I know there are examples you see on TV where bars are in flagrant violation of social distancing protocols and are just thumbing their noses at authorities. I’m not that guy. I jumped through all kinds of hoops to do the right thing and look what I got for it!”

We feel like his point is well taken and apparently we’re not the only ones. Upon finding out about what happened, Bloomfield musician Brian Ayers started a “Go Fund Me” campaign to help Shelly pay his fine. Within a day almost $4,000 had been raised, at which point Shelly asked that the campaign be stopped so he wouldn’t appear greedy. “Mine isn’t the only good cause out there,” he said.

But Shelly supporters have contributed in other ways. As his concert series is currently shut down, he’s had no choice but refund the money to all the people who had paid for tickets to the multiple shows he had scheduled throughout the summer. Many of these gracious people have told him to just keep the money.

Jim Shelly has always prided himself on being a good steward for the community. Just to throw out one example, he provided over 500 meals in conjunction with the Lima Food Pantry to assist during the first two months of the pandemic.

We have been good friends of Jim’s for decades now and can truly speak to his character from a position of knowledge. As this situation plays out please consider this our personal plea for the community to show its support of this innovative, hardworking and respectable local businessman.