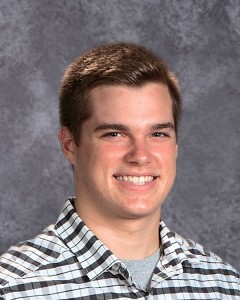 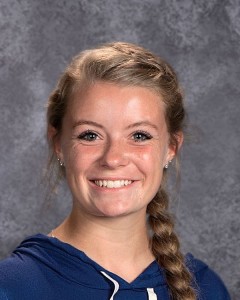 Jessica Tillapaugh (photo top left) and Jerry Brushafer (top right) are the valedictorian and salutatorian at Lima Christian School this year. Photos courtesy of the school.

A three-sport athlete, Jessica Tillapaugh learned the importance of time management and successfully navigated combining a busy sports schedule with a demanding academic courseload to become valedictorian of the Class of 2017 at Lima Christian School. Meanwhile, Jerry Brushafer showed dogged determination and persistence in both his academic studies and pursuing his dream of swimming in high school and he was named salutatorian this year.

Tillapaugh, the daughter of Michelle and David Tillapaugh of Henrietta, is heading to Monroe Community College in the fall to major in biology and intends to go on in a 2+2 program. She also considered Houghton College and Cedarville University in Ohio.

Carrying a 4.0 grade point average, Tillapaugh took challenging courses such as Advanced Placement Biology as well as Calculus 1 and 2 and English 101 through Genesee Community College.

In addition to her academic work, Tillapaugh was very active at LCS as she was a member of National Honor Society for two years, the Art Club and the Mentors for Minis program which pairs high school students with elementary school-age children. She was in the program all four years of high school. She served as the Class Vice President.

Outside of school, Tillapaugh works at Reed’s Ice Cream in Henrietta. The 18-year-old has also been a counselor at Summer’s Best Two Weeks Camp for the past four years at Lima Baptist Church.

Tillapaugh has earned an English Award as a junior and the valedictorian award as a senior.

A four-year member of the varsity soccer team, Tillapaugh was a captain of the squad in her junior and senior years. She played both goalie and forward last fall and scored six goals (second on the team) with two assists. She was selected for the Exceptional Senior Game and was a two-time All-League first team pick and an All-Greater Rochester honorable mention. She also received a Leadership Award in the sport. Tillapaugh was on the varsity basketball team for two seasons, being a captain both years. She played in 19 games this winter and scored 118 points (6.21 per game) with 64 rebounds, 16 steals, seven assists and two blocks. She was named to the All-League second team as a junior and All-League first team as a senior. She received a Leadership Award and helped the team earn the Private-Parochial League Sportsmanship Award in her junior year. Tillapaugh played on the varsity softball team for two years, serving as a captain this spring. She played third base, first base and in the outfield and collected seven hits. She may participate in intramural sports at MCC.

Tillapaugh says her favorite memories at Lima Christian have been being on the sports teams and the friends she has made through the teams. She is also grateful to the teachers and staff at the school.

“Coach Val (Coykendall) who coached me in soccer and softball helped me compete to the best of my ability,” she said. “Mrs. (Lisa) Arnold has been a great mentor to me and Mrs. Wendlandt has helped me become a good writer.”

Brushafer, the son of Jennifer and Robert Brushafer of Dansville, will attend Rochester Institute of Technology this fall to major in industrial engineering. He also looked at Rensselaer Polytechnic Institute, Syracuse University, Binghamton University and University of Buffalo.

Holding a 4.0 average in the classroom, Brushafer took Advanced Placement courses in Pre-Calculus and Statistics, U.S. History, Physics and Economics along with Calculus 1 and 2 and English 101 through GCC.

Brushafer, 18, was a class officer from his freshmen through junior years. He was Student Council Vice President as a senior, in National Honor Society for two years, played saxophone in the band for two years and was in the Mentors for Minis program for three years. He competed on the cross country running team for two years.

Activities outside of school also fill his time as he works as a lifeguard at Stony Brook State Park, something he has done for three years. He has been involved in the Sunshine Softball program in Dansville for seven years and has been chairman the last three years for the program which brings together kids with special needs paired with kids on area varsity baseball and softball teams for a day of softball in Dansville every May. Two years ago, he initiated Sunshine Swimming, a day in November that allows children with special needs to make their dream of swimming become reality. Brushafer is also a certified scuba diver, an altar server at St. Mary’s Church in Dansville and COO of his sister Mary Kate’s Santa Hat Society, a non-profit corporation which helps children experience the joy of the Christmas season despite a family’s personal loss, illness or other tragedy.
Brushafer has received the McCaffrey Memorial Leadership Award presented by Lima Rotary and a 2017 Community Service Award for Sunshine Softball and Swimming sponsored by the New York State Festival of Balloons in Dansville.

Although LCS does not have a swim team, Brushafer received Team of One status from Section V to train and go to meets with Dansville, his home school. His places do not count for Dansville in team meets. He has been a varsity swimmer all four years of high school and was a Section V finalist all four years, culminating his career last winter by winning Section V Class D titles in the 500 freestyle (5 minutes, 5.51 seconds) and the 100 breaststroke (1:01.69). He will swim at RIT.

“I feel blessed to have received a faith-based education at Lima Christian,” he said. “The love and support I have received there have helped make me the person I am and created relationships that will last a lifetime.”