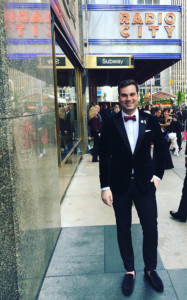 Griffin Dohr earned a Tony Award as part of the group which produced Hadestown, which won Best Musical at the Tony Awards earlier this month. Provided photo

BY CESIDIA CAROSA
For those who watched this year’s Tony Awards you may have recognized a familiar face on the screen. A native of Honeoye Falls, Griffin Dohr, HFL class of 2011, graced the stage along with the producers, cast and crew of Hadestown to accept the Tony Award for Best New Musical. We sat down with Griffin to talk about his experience that led him to his role as co-producer.

Q: I know you went to college in NYC but what made you decide to stay after graduating?
After graduating from Fordham University in 2015, I stayed in New York City to pursue a theatrical career. Broadway continues to be a booming industry and I felt as though NYC was the place for me. The city is filled with energy and although it can be exhausting, the people and experiences keep me motivated to succeed in the theater capital of the world.

Q: What was your first job/internship?
My first internship was out in Los Angeles at a startup called Omaze. The organization creates once-in-a-lifetime experiences with celebrities, in support of charitable causes they are involved with. They have grown tremendously since I worked there in 2014. I was fortunate enough to live with my sister Mackenzie, who works as a writer out in LA.

Q: Did you immediately know what you wanted to do?
Interestingly enough, I have a science degree from Fordham University. I had always pictured myself going to med school and having a career in medicine, but throughout my time in college, I realized my true passion was entertainment. I took on internships in events and television and it wasn’t until 2017 that I had my first theatrical job as an assistant director at the George Street Playhouse in New Jersey.

Q: How did you find your way into working on Broadway and eventually co-producing a musical?
After my time at the George Street Playhouse, I worked as an intern for 321 Theatrical Management, a Broadway General Management firm. I was then brought on full time, specifically working under three producers. I came in right as The Boys In The Band was starting on Broadway and helped secure two investors for the show. From then on, I knew I wanted to produce on my own and was fortunate to make the proper connections on Hadestown, in order to do so.

Q: What did you learn back in high school that you think has helped you with your career?
I developed a strong work ethic, that has pushed me to survive the craziness of New York City. I was involved with middle school and high school theatrical productions, but didn’t see myself on the stage after college. These shows did however give me a true appreciation for the art and have helped me understand how much work goes into each and every production, whether it be Broadway or high school theater.

Q: What’s your favorite thing about NYC?
The “city that never sleeps” mentality. I have the ability to experience every inch of NYC at all hours. There is something happening on every block and energy radiates through the streets.

Q: What do you miss most about Rochester?
I miss my family. Rochester was a wonderful place to grow up and I’m extremely fortunate to have spent my first 17 years living there. I love being home for the holidays to simply spend time with my family and friends. Oh and the garbage plates.

Q: Any piece of advice for someone who aspires to work in the theater industry (specifically from a producing side)?
Don’t get discouraged. The theatrical industry can be very small and jobs tend to be few and far between but if you truly are passionate for the art, you’ll find work. As a producer, it’s extremely important to make connections. Networking has always been a daunting task for me but I’ve learned to meet people in all different settings.

Q: What current projects are you working on/what is the next step in your career?
As far as producing goes, I’m currently looking for my next opportunity. I’m working full time at a Broadway general management firm in order to continue growing in the industry. I hope to jump on a show for the next Broadway season to continue building my producing credits.

Q: What is your favorite Broadway show of all time?
Little Shop of Horrors. The soundtrack and plot are enough to make someone fall in love with it. It’s completely strange and I could listen to the music every day (which I do).

Q: If you could produce any show what would it be? (fine if same as above!)
I would love to produce a revival of Guys and Dolls.

Q: What show (Broadway or other) do you suggest to go see in NYC?
Hadestown! Also, there are a handful of very strong plays currently running in NY. To Kill a Mockingbird and Network are big hits at the box office. What the Constitution Means to Me has also proven to do very well and my old boss is the executive producer on it. But if there’s one show you should see, it’s Hadestown. It’s visually stunning and I’m honored to be involved as a producer.
Hadestown depicts the two mythical tales, Orpheus & Eurydice and Hades & Persephone, that intertwine in a post-apocalyptic setting, with a jazzy New Orleans feel. In addition to best musical, Hadestown took home eight Tony Awards. The show is currently running on Broadway at Walter Kerr Theatre.