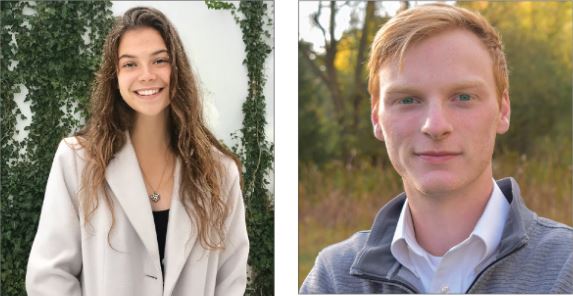 Fedorchuk, 17, was named valedictorian of the 15-member class. The daughter of Nadya and Pedro Fedorchuk of Honeoye, Fedorchuk will be attending Roberts Wesleyan College in the fall to study Teaching English to Speakers of Other Languages (TESOL).

“I was pretty set on going to Roberts Wesleyan four years ago,” said Fedorchuk during a recent phone interview. “My sister went there and I just really liked the college.”

Fedorchuk carried a 4.0 average. Among her challenging courses, she took AP English Literature and also two courses through Genesee Community College: Statistics and English 101. In addition to her academics, Fedorchuk was very active in the school. She was in National Honor Society, choir, Ski Club and Writing Club. She was also in the Mentors for Minis program for two years, mentoring a younger student at the school. Fedorchuk also played varsity soccer at the school for four years. A captain of the team last fall, she played defender and midfielder and helped the team record two shutouts. She is thinking of playing junior varsity soccer at Roberts Wesleyan. She was also involved in the International Program at Lima Christian, acting much like an ambassador for the school.

Outside of school, Fedorchuk also kept busy. She is a baby sitter and has helped with Vacation Bible School, the worship team and as a Sunday School assistant teacher at her church. This past summer, she went on a mission trip to Argentina and served there for a month.

“Being a part of the international program has taught me about other cultures, tolerance for all and their ways,” Fedorchuk said. “I have been at LCS for 13 years and it is so close-knit. My classmates are like family to me. My teachers have made a big impact as they are very supportive. The atmosphere is so pivotal. The school community has encouraged me to work my hardest and has prepared me to enter this new chapter of my life. One of my favorite memories of LCS is getting to serve on the Worship Team on Fridays.”

Appleton, 18, is the salutatorian of the class. The son of Karin and David Appleton of Bloomfield, he will be attending Hobart College to study either business or engineering or possibly both. He also considered Binghamton University.

“The small class size and family atmosphere has been wonderful,” he said during a phone interview. “It really is more like a family than a school. The teachers embrace us, helping us not just with our education but with life situations. Dr. Minter, in her upper level science and math courses, taught us how to push ourselves and Mr. Sanders, our Bible teacher, has had an influence on me from a spiritual standpoint.”

Appleton was a very involved student at LCS where he was part of the band, marching band, choir and National Honor Society. He was Student Council President and Worship Team Leader. He was in the Mentors for Minis Program for four years and was a three-sport athlete at the school.

When not involved in a school activity, Appleton worked at Parkside Pizza in Bloomfield for three years and, just a couple of weeks ago, started work at Pioneer Millworks in Farmington. He went on a mission trip to Guatemala as a junior through his church, Calvary Chapel of the Finger Lakes in Farmington, and also played on the church softball team. For two years, he has volunteered in a soup kitchen and at Flower City Work Camp.

Appleton has received many awards and honors such as a Dean’s Scholarship from Hobart for his academic achievements and a National Merit Scholarship. The honor roll student also has awards for his athletic accomplishments. He ran as a team of one in cross country for four years, winning Section V Class D titles twice, once as a sophomore and once as a junior, and finished 11th at the state meet as a sophomore and ninth at the state meet as a junior. Last fall, he placed 13th with a time of 19 minutes, 17.6 seconds in the Section V Class D championship. He played on the varsity basketball team for two-and-a-half years. He was a starting guard the past two years, also serving as a captain this year, and led the team this past winter with a 10.31 points per game average. He finished four years on the varsity baseball team. A starter at pitcher or shortstop, Appleton paced the team with 20 hits this year and scored 14 runs. He received All League 1st team honors in all three sports the past two years. As a sophomore, he was named to the All-Greater Rochester 2nd team for cross country running and, as a junior, to the All-Greater Rochester 1st team. He also was named a News10 Scholar Athlete and was Lima Christian’s Private-Parochial Senior Male Athlete of the Year. He intends to be on the cross country team at Hobart.

“My favorite memory from LCS is when we won the Section V Class D title in baseball my sophomore year and went to the Regionals,” he said. “My other favorite memory is being in classes with my friends.”