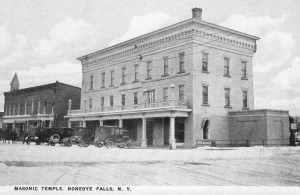 The new Masonic Temple in Honeoye Falls as it looked shortly after it was opened to the public in 1920. Union Star Lodge No. 320 F.&A.M. will be sealing a time capsule in the basement of this 200 year old building marking its centennial as the home for its lodge. HoneoyeFalls/Mendon Historical Society postcard collection

This week marks the 100-year anniversary of the opening to the public of the Masonic Temple on North Main Street. Converted and refurbished from the then nearly century old Wilcox Hotel (nee Falls Hotel), the Union Star Temple Association, Inc. formally opened the building on Monday, November 15, 1920 for public inspection. Union Star Lodge No. 320 F.&A.M. of Honeoye Falls held its first lodge meeting there on Wednesday, November 17, 1920.

The lodge room is contained within the entire third floor. The meeting rooms, dining room, and kitchen occupy the second floor. The first floor hosted four business slots, with the Temple Restaurant, Durrant’s clothing store, and Lee’s barber shop already open by the first week of November 1920. The Honeoye Falls post office had just received its new equipment that week and would move into the building shortly thereafter.

To help celebrate the anniversary of this landmark, the Sentinel has reprinted on page 8 the front page of the December 30, 1920 edition of the Honeoye Falls Times. It might be a little hard to read and, for those of you who might notice these things, there are a couple of historical inaccuracies. But the basic gist is there, including a very good history of Masons in both Honeoye Falls and Lima.