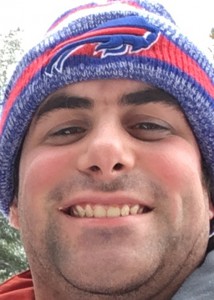 Patsy D. Carosa, an elementary teacher, has been a Bills fan since 1991 anda season ticket hodler since 2002. He watched 3 of their Superbowls but unfortunately he was too young to remember them.

BY PATSY D. CAROSA
It has been 22 years since Jim Kelly retired from the Buffalo Bills. Jim Kelly is considered by many as the greatest quarterback in team history. He led the Bills to four straight Super Bowls, a feat that has not been accomplished before or since. He set records that have not been touched since he left the Bills in 1996. Since the day of his retirement, there have been a total of 18 quarterbacks that have tried to fill Jim Kelly’s shoes. The quarterbacks have included Todd Collins, Alex Van Pelt, Doug Flutie, Rob Johnson, Drew Bledsoe, J.P. Losman, Kelly Holcomb, Trent Edwards, Brian Brohm, Ryan Fitzpatrick, EJ Manual, Thad Lewis, Jeff Tuel, Kyle Orton, Tyrod Taylor, and Nathan Peterman. Most of these quarterbacks had disappointing results during their time as the Bills single caller. They never lived up to their expectations and many were released within three years. This is not how you build a winning football culture. You need stability at the games most important position. A successful quarterback will immediately lift his team and gain the respect of his fellow teammates. He will be a leader that his team would rally around when the game is tight. The Bills have not had this since Jim Kelly was in a Bills uniform.

Much was expected of the Bills during the 2018 NFL Draft. This was the draft that the Bills would move up into the top 10 picks and pick their franchise quarterback. The team has stock piled a load of draft picks during the last year. The most recent one was trading Cordy Glenn to the Bengals for their 12th pick. This made it easier for them to trade with a team within the first ten picks. The Bills have drafted three quarterbacks in the first round. The first was Jim Kelly in 1983, J.P. Losman in 2004, and EJ Manual in 2013. We all know Jim Kelly became a Hall of Famer but the other two didn’t. They were complete busts and didn’t contribute much of anything in a Buffalo uniform. This is why people were nervous about the Bills trading up for a quarterback. The Bills traded both for Manual and Losman but the difference is that this year the Bills were looking at the top quarterback prospects of the draft. Manual and Losman were not considered a top player from their particular draft. Drafting a quarterback can be risky for a team. The general manger and head coach put their jobs on the line in hopes to grab the next great quarterback of the NFL. The Bills scouts had done their job of viewing every prospect during the college football season. General manager Brandon Beane and head coach Sean McDermott had looked at every prospect that the Bills could trade up for in the upcoming draft. Now it was time to make their move.

After months of debate on the radio and around Bills nation, the draft was finally here. The draft has always been the first real football event since the end of a Bills season. It’s really an excuse for people to get back to their football rituals even though the season is 5 months away. This draft felt like an actual football game for the Bills which I don’t feel in most drafts. I was with my cousin Thomas, my Uncle Sammy, and my sister’s boyfriend Will. The anticipation of where the Bills might draft was on everyone’s mind. By the fifth pick, the Bills were down to two top quarterbacks. They were Wyoming’s Josh Allen and UCLA’s Josh Rosen. Although Josh Rosen was considered more NFL ready, the Bills were connected to Josh Allen from the start. The seventh pick belonged to the Tampa Bay Buccaneers. That’s when we saw the Buccaneer logo change to a Bills logo. They had done it. They had traded for a possible quarterback. We were all excited when NFL commissioner Roger Goodell announced, “With the 7th pick in the 2018 NFL draft, the Buffalo Bills select Josh Allen.” Our whole room was excited that the Bills finally got their quarterback that they wanted.

The truth about the draft is we really don’t know how these players will perform until they are playing in a NFL game. There are many “can’t miss prospects” every year that don’t pan out as expected. We just have to put our faith in Brandon Beane and hope that he made the right selection. Many people would have preferred Josh Rosen because he was more NFL ready. We will see if that will be the case. Josh Allen is the right type of quarterback for Brandon Beane and Sean McDermott. Josh Allen is tall and has a strong arm that could help in the cold weather he will face in Buffalo. I think Bills fans should give him a chance to prove himself. There is always a chance that he could do something that my hero, Jim Kelly never did. Josh Allen could finally help the Bills win a Super Bowl for the great city of Buffalo and all of Western New York.