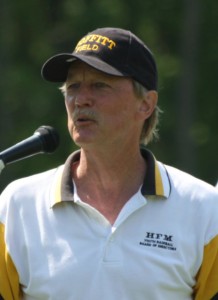 BY JOHN MOFFITT
It is with a heavy heart that I share about David Lawlor, a Mendon resident, who recently lost his battle with cancer. David was a fierce supporter of youth baseball in the HFL-Mendon community.

You may know him from his many years of service to the Honeoye Falls-Mendon Youth Baseball Board of Directors. David organized the mid-summer tournament for several years, where he developed many friendships and was an ambassador, not only for youth baseball but our entire community.

David had an unmistakable Texas drawl, and would frequently call an acquaintance “fella.” David also coached baseball for many years, especially senior league, for ages 13-16. In 2008, David was a driving force behind the effort to build a new 90-foot baseball diamond at the Mendon complex for youth ages 13 and older.

Professionally, David was a professor at Rochester Institute of Technology (RIT). RIT will be establishing an award in David’s name to honor a student who exemplifies service and perseverance. They will also be dedicating the newly renovated Genomics Lab in his honor. If anyone is interested in sending a gift contribution to the scholarship fund, please contact Dr. André Hudson at aohsbi@rit.edu or 585-475-4259.

Longtime Mendon resident and friend, Eric Nelson, describes David as a “true gentleman.” Many people would describe David that way; he was a hard worker with a kind-heart and calming nature. It has been said that the two greatest gifts that human beings can give one another are our time and our love. David spent hours at the fields getting them ready for game days, and it was evident he loved seeing the kids enjoy themselves and loved our community.

The HFL-Mendon Youth Baseball Board of Directors will be honoring David by planting a tree in his memory at the baseball field complex located in the hamlet of Mendon. We send our condolences to David’s family, especially his son John, currently living in California. David’s dedication left a lasting and positive impact on youth baseball in Mendon, and his efforts undoubtedly benefitted our entire community.