Board of Supervisors Recognizes Heroism, Bravery and Professionalism of Livingston County Sheriff’s Office 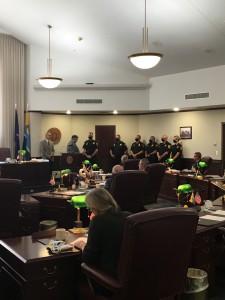 At the Board of Supervisors meeting on August 26, 2020, the Livingston County Sheriff’s Office was recognized for its heroism, bravery and professionalism during a perilous incident in late May 2020.

On May 27th, a tractor trailer driver was stopped for speeding in the Village of LeRoy, Genesee County.  During the stop, the driver refused to follow directions from law enforcement and pulled away, sparking a multi-county police chase. In the course of the incident, the driver, later found to be an “anti-police extremist”, fired at least twenty-four rounds at law enforcement and rammed at least four police cars.  Four police cars were struck with gunfire, including a Livingston County Sheriff’s car that was hit with nine bullets.

Nearly an hour and fifteen minutes after the traffic stop, deputies declared the driver in custody. It is a true miracle – given the chaotic and dangerous circumstances of the pursuit – that there were no injuries to officers or civilians with the exception of the driver. Based upon items recovered during the investigation that followed the chase, including improvised explosive devices and assault rifles, it is clear that this individual was planning a larger, more threatening attack and the intervention of law enforcement undoubtedly saved human life.

During the course of this incident, despite being the target of senseless acts of violence, members of law enforcement, including those from the Livingston County Sheriff’s Office, bravely continued to meet the call of duty in order to ensure the safety and security of the general public.

David L. LeFeber, Chairman of the Livingston County Board of Supervisors, stated, “Today, let us recognize each and every member of the Livingston County Sheriff’s Office for their courage, bravery and resolve in the face of extreme danger.” LeFeber continued, “We commend our law enforcement officers for their dedication to public service and commitment to protecting our community.”