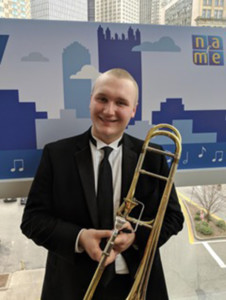 Charles “CJ” Tomaszewski is shown at the All-Eastern Honors Band concert at the David Lawrence Convention Center in Pittsburgh on April 7. Submitted photo

During the 2018 school year, music students from across the United States auditioned for parts in their local, district, and state music honor ensembles. Those top high school musicians who were later accepted to their All-State ensembles were then given the opportunity to audition and apply for the All-Eastern Honor Ensembles. Students selected for the All-Eastern Honors Ensembles “represent the best of the best from their respective states and have come together (in Pittsburgh) to present outstanding performances.” (NAfME Eastern Division Chairman, Dennis Emert).

Last month, Honeoye Falls-Lima High School sent one of their students, Charles Tomaszewski, to play with the All-Eastern Honors Band in Pittsburgh, PA. Charles “CJ” was selected as principal trombone in the Honors band. CJ traveled to Pittsburgh with his family, where he joined other talented music students from across the Eastern region of the United States. The students worked under the direction of some of the finest musical leaders in the country, including Honor Band conductor, Brad Genevro. Throughout the four day retreat the students collaborated during rehearsals, attended concerts together in the evenings, and performed a culminating concert at the David Lawrence Convention Center in Pittsburgh on Sunday April 7th.

“I am very grateful to have had this unique opportunity to collaborate with the finest young musicians and musical leaders in the nation. This was a tremendous musical experience, one that I will cherish forever,” said Charles.