Gilbert is valedictorian and Cody salutatorian at HF-L

Home Gilbert is valedictorian and Cody salutatorian at HF-L 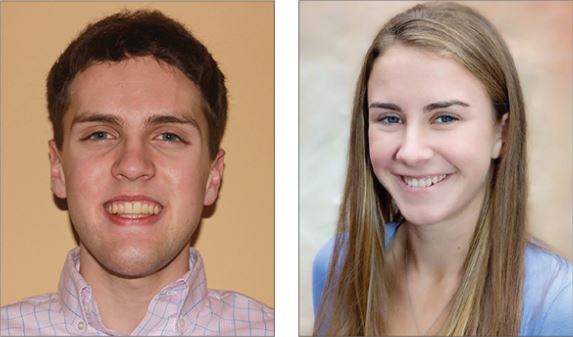 Sam Gilbert (photo above left) and Lauren Cody (photo above right) are at the top of the Class of 2019 at Honeoye Falls-Lima. Photos courtesy of the HF-L Yearbook

Numbers are a common denominator for Sam Gilbert and Lauren Cody, the valedictorian and salutatorian of the Honeoye Falls-Lima Class of 2019.

“I chose Nebraska because I liked the campus and it just seemed to be the right fit,” said Gilbert during a phone interview.

Gilbert, 17, was a member of National Honor Society, Model UN, and a Link Crew leader. As a member of the Math Club, he helped that group go to the New York State Mathematics Competition the past three years. His statistics teacher and the Math Club advisor admitted that sometimes Sam could teach him some things. Gilbert also earned a perfect score on the ACT. He was often selected by teachers and counselors to provide academic help to others.

Lest you think Gilbert is strictly a numbers guy, he did indulge his creative side by getting involved with the school’s Drama Club. He was in the fall drama production all four years of high school and in the spring musical all four years. With his math background, it might have been a case of typecasting when he was cast as Hannibal, the math whiz, in the drama club’s production of The Curious Savage last fall. This past spring, he was an ancestor in The Addams Family.

“In The Curious Savage, it was fun to play the character I had,” he said. “I got involved in the drama club and musicals because my friends were involved; it was a nice creative outlet for me and I kind of broke out of a shell through getting involved. I found a place through the Drama Club and Math Club. The dramas and musicals, going to the state meet with the Math club and to conferences with the Model UN are among my favorite memories.”

Outside of school, Gilbert has worked as a Hebrew Teaching Assistant at Temple Sinai since 2014.

Gilbert was a National Merit Finalist and a recipient of a 2019 New York State Scholarship for Academic Excellence.

For Cody, it wasn’t just the numbers she put up in the classroom but also the numbers she put up on the track. Cody is the Class of 2019 salutatorian with a 4.1 grade point average. She is headed to Cornell University to study biology with a possible pre-medicine track in her future. She also looked at Princeton, Middlebury and Amherst.

“I used to live in Switzerland and went to an International School where you had to take a foreign language, but it couldn’t be French so I picked Chinese. I studied and then took the HSK exam to get the certification. The independent study was an amazing experience and I would do it again. The International School was also a good experience as there were students from Tanzania and just all over the world so I learned a lot about other cultures.”

At HF-L, Cody has been Class President for four years and was a member of Math Club, Newspaper Club, French National Honor Society, Link Crew, Cougar Big mentoring program and Model UN where she was an ambassador and treasurer for two years. The 18-year-old was also the Community Service Chair of Rotary Interact and the reading program outreach coordinator for the National Honor Society. She was also a member of the varsity tennis team for three years, winning six matches last fall at second singles. Cody was on the varsity track team for four years and is the school record-holder in the 200 meters, having broken the record with her fourth place time of 26.8 seconds at the Section V Class B Championship. She was also on the sectional-winning 1600 relay team (4:15.30) and third in the long jump (15-2.5).

“Winning sectionals in track in my sophomore and senior years are favorite memories,” said Cody, who is considering club track at Cornell. “Another is working on the homecoming float all four years of high school.”

Outside of school, Cody participated in a UB-HF-L science partnership that encouraged genetic research and provided an opportunity to present at a regional symposium. Through the Perry Outreach Program, she explored careers in medicine and engineering. She volunteers at the Open Door Mission and Mendon Library and is a French tutor for Middle School students. It is as a Girl Scout where she has had a big impact. To earn her Silver Award, she organized care packages to send to soldiers in Iraq. Cody earned her Gold Award with her project centering on reading by organizing fundraisers, purchasing books for distribution, recruiting teen volunteers and organizing a reading club for inner-city youth.

“I am really passionate about reading,” she stated. “When I was younger, my parents read to me all the time. I created a club at HF-L for students to read to third-grade kids at a school in the city. We also brought books that the kids could take home with them. To raise money to purchase the books, we held a chicken barbecue and raised $2,000 which will allow the club to continue for another year. My hope is that the third-graders will have a positive experience in reading and continue with that.”

Cody has received a number of awards, including the American Chemical Society Award, the Dartmouth College Book Award, a 2019 New York State Scholarship for Academic Excellence, a 2019 National Merit Program Commended Student award and a Young Woman of Distinction scholarship and numerous Scholar-Athlete Awards as a member of the tennis and track teams.