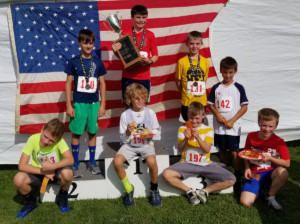 The Bellizzi family, like many others over the years, has made the annual Youth Trophy Cup Runs a can’t-miss event. They have also made the victory stand a can’t-miss destination. For the second year in a row, Linden Bellizzi won the race for nine and ten year old boys. Winning that same age group, as well as the next higher one, the previous three years, was his brother Braden. A third Bellizzi, Collin, has been runner-up in his age group this year and the previous two. That kind of family participation and enjoyment of the Fall Weekend “race-day” has been shared by so many others over the event’s twenty-three years.

As is tradition, the Youth Trophy Cup Runs was held on the Sunday of the school’s big Fall Weekend celebration, this year, October 6th. It is part of the HF-L school district’s Community Programs, headed by Ari Freedman-Weiss.

In addition to the Bellizzi family success, there were many shining performances this year. Greta Goodberlet is establishing herself as a terrific young talent. She won the very competitive six year old race by a large margin, as she did last year in the five year olds race. Evelyn Odell won the nine and ten girls race with steady, strategic pacing that allowed her to overcome a large gap and move to first place for the win with only a hundred yards to go. Sarah Smith ran an excellent 5:43 time to win the eleven and twelve girls race with a big margin. Other wins were achieved by Wyatt Torpey, five year olds, Evan Mason, seven year olds, Mackinley Buckley, eight year olds and Samuel Jokl, eleven and twelve boys. Lee and Reed Woodruff were outstanding, both notching second in their age-group races. The Hulsey family saw Charlotte take second in the nine and ten girls race and sisters Gretchen and Kate getting second and third, respectively, in the eleven and twelve girls race. See the full race results for all participants presented below.

Sponsors and volunteers make the Youth Trophy Cup Runs happen. Pizza, donated by Salvatore’s Old Fashioned Pizzeria, was a well-earned post-race carbohydrate replenishment for all. Water and balloons were, again, donated by long-time sponsor Honeoye Falls Market-Place. Along with Market-Place, Molye Chevrolet and the Honeoye Falls branch of M&T Bank are important, annual financial contributors. Many high school students volunteered to help set-up and run the event. They included National Honors Society members and athletes from the HF-L cross country and other teams.

Due to construction at the Middle School grounds, the Youth Trophy Cup Runs was relocated this year to behind the Manor School. The new courses were carefully laid out and precisely measured so that they exactly match the distances of the previous courses for each age group. All prior course records, therefore, remain applicable for this year and those to come.

Results of the races are as follows: