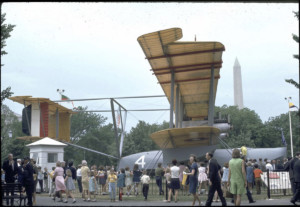 The Flying Boat NC-4 that completed the trans Atlantic flight. Photo from the Smithsonian Institute website

The October meeting of the Honeoye Falls / Mendon Historical Society will feature Ben Johnson, the Executive Director of the Glenn H. Curtis Museum in Hammondsport. The Society asked Ben to speak to us on this, the 100th anniversary year of a U.S. Navy flying boat making the first transatlantic flight. This is the 100th anniversary of the Curtiss Flying Boat’s Tranatlantic flight.

Originally from Lincoln, Nebraska, Ben Johnson graduated with a B.A. in History from Nebraska Wesleyan University and an M.A. in History from the University of Nebraska – Lincoln. He started in the museum field as an intern during his undergraduate years. He held a variety of job duties and titles over the subsequent 15 years. He has served as Executive Director of the Glenn H. Curtiss Museum since 2016.

His talk will include an update on the Curtiss Museum and will discuss future plans and projects at this dynamic museum.

The meeting will be held at 7:30 p.m. on October 3rd at the Mendon Community Center, 167 North Main Street in Honeoye Falls. This facility is handicapped accessible. The meeting is open to the public. Refreshments will be served. For information, call 624-5655.

The Smithsonian Institute has this background on the Curtiss Flying Boat, NC-4, on its website:

“The US Navy achieved the first transatlantic flight eight years before Charles Lindbergh became world famous for crossing the Atlantic nonstop and alone. Three Curtiss flying boats, each with a crew of six, were involved: NC-1, NC-3, and NC-4. The Navy wanted to prove the capability of the airplane as a transoceanic weapon and technology.

The five-leg flight began on May 8, 1919, at the naval air station at Rockaway Beach, New York. It followed a route to Nova Scotia; Newfoundland; the Azores in the middle of the Atlantic; Lisbon, Portugal; and Portsmouth, England. Only NC-4, commanded by Albert C. Read, flew the whole way. The entire trip took 24 days.

Conceived during the First World War, the NC class of flying boats, popularly known as ‘Nancy Boats,’ was intended to meet a U.S. Navy requirement for extended range aircraft for anti-submarine patrol. An important design consideration of the NC class held that these flying boats be capable of flying under their own power from the continental United States to the European war zone because shipping space was in short supply during this period in 1917. The German U-boat offensive at the time was sinking close to one million tons of Allied shipping every month.”