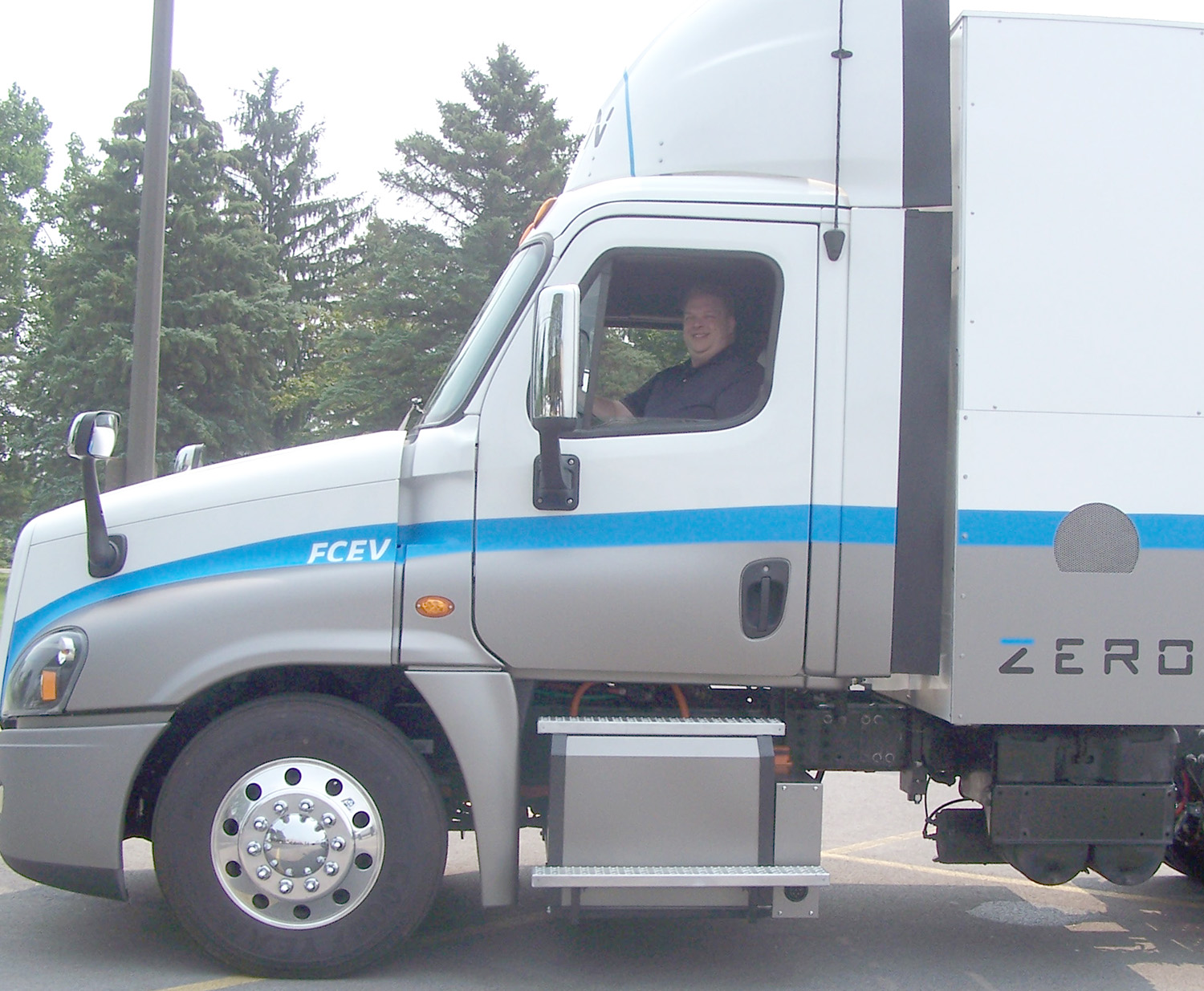 In the photo above, Chief Technology Officer Gary Robb is in the cab of the first U.S.-made hydrogen fuel cell truck by Hyzon Motors. Photo by Donna MacKenzie

Hyzon Motors celebrated going public and its stock being traded on the Nasdaq Global Select Market on July 19 by unveiling its first hydrogen fuel cell truck entirely made in the USA at its Quaker Meeting House Road facility in Honeoye Falls.

“Before these trucks were made in the Netherlands by our joint venture partner which is technically called Hyzon Europe,” said Chief Technology Officer Gary Robb last Monday after showing off the truck. “Some were also made in China. This is the first made here. A lot of the components on this truck are what our partner in the Netherlands puts on their trucks. We just adapted what they’re doing in Europe to a U.S. based truck.”

Europe is a bit ahead of the U.S. in adopting the hydrogen fuel cell technology as is China, Japan and South Korea. Hyzon bought this fleet truck, which originally ran on diesel, took out its diesel parts and put in the fuel cell components. The result is a much quieter, less polluting and less smell vehicle.

“This is a used diesel truck that we bought out of a fleet, removed the diesel and put the fuel cell in,” Robb said. “That’s what we’re trying to demonstrate is that we can upgrade a fleet to zero-emission, or the next new trucks someone buys, we can also grab those before they’re in a fleet and upgrade those. We don’t have to build from new. The truck drivers have the same truck they’ve been driving; they’re familiar with how it works. The difference is now it doesn’t have noise, smell or pollution or anything like that. It’s actually quite a pleasurable ride for the driver.” 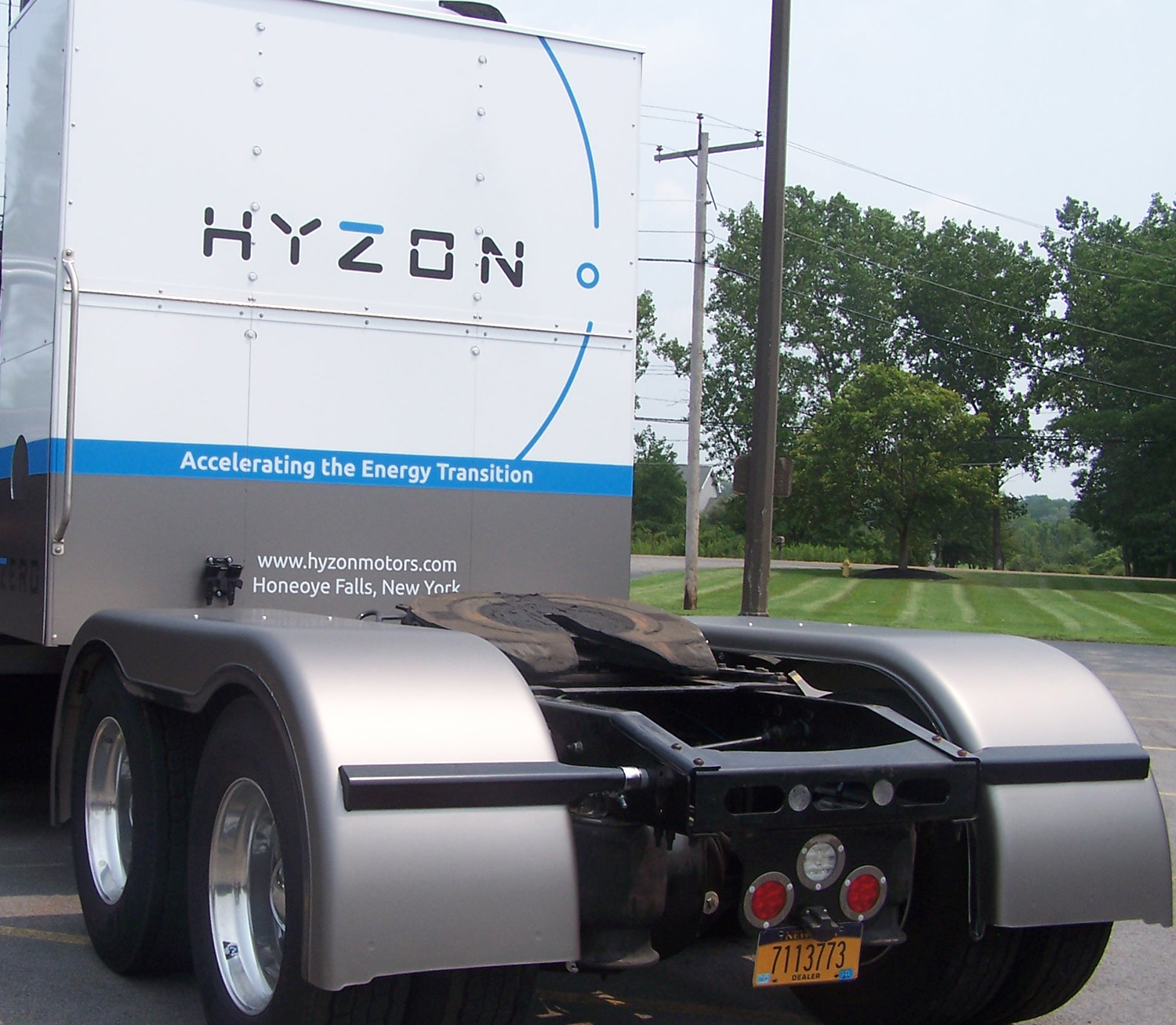 In the photo below, the back of the truck proudly states where Hyzon is located. Photo by Donna MacKenzie

Hyzon is targeting fleet customers who do not have long-haul, coast-to-coast trucks but are what Hyzon calls “back to base.”

“The reason we do that is then they can have one fueling station to service all the trucks and they’re not reliant on finding that fuel in a lot of places across the country,” Robb explained. “The range anxiety goes away. Drivers know they can do full round of the day on one fill-up, come back and fill up and get ready for the next day.

Hydrogen can be produced from waste. So theoretically, Hyzon could take the waste from High Acres Landfillin Perinton, compress it and make hydrogen out of it. That would reduce the carbon footprint. The hydrogen fuel fill would be like a diesel fuel fill, but hydrogen instead of diesel.

Hyzon Motors USA Inc., a spinoff of Singapore-based fuel cell manufacturer Horizon Fuel Cell Technologies, completed its merger with Decarbonization Plus Acquisition Corporation on July 16. Decarbonization and Hyzon Motors USA are now known as Hyzon Motors Inc. and is now a $500 million dollar company, said Human Resources Director Karen Jenkins. Hyzon bought the former Branson building on Quaker Meeting House Road this past February. It first established its US operations in Honeoye Falls in 2020, moving into part of the old General Motors facility at 10 Carriage Street. It still has a lab at 10 Carriage Street and the lab will stay there until Hyzon’s three-year lease is up. Then, the lab and its workforce will move to Quaker Meeting House Road as well.