Jonny B’s is a Red-Hot Business 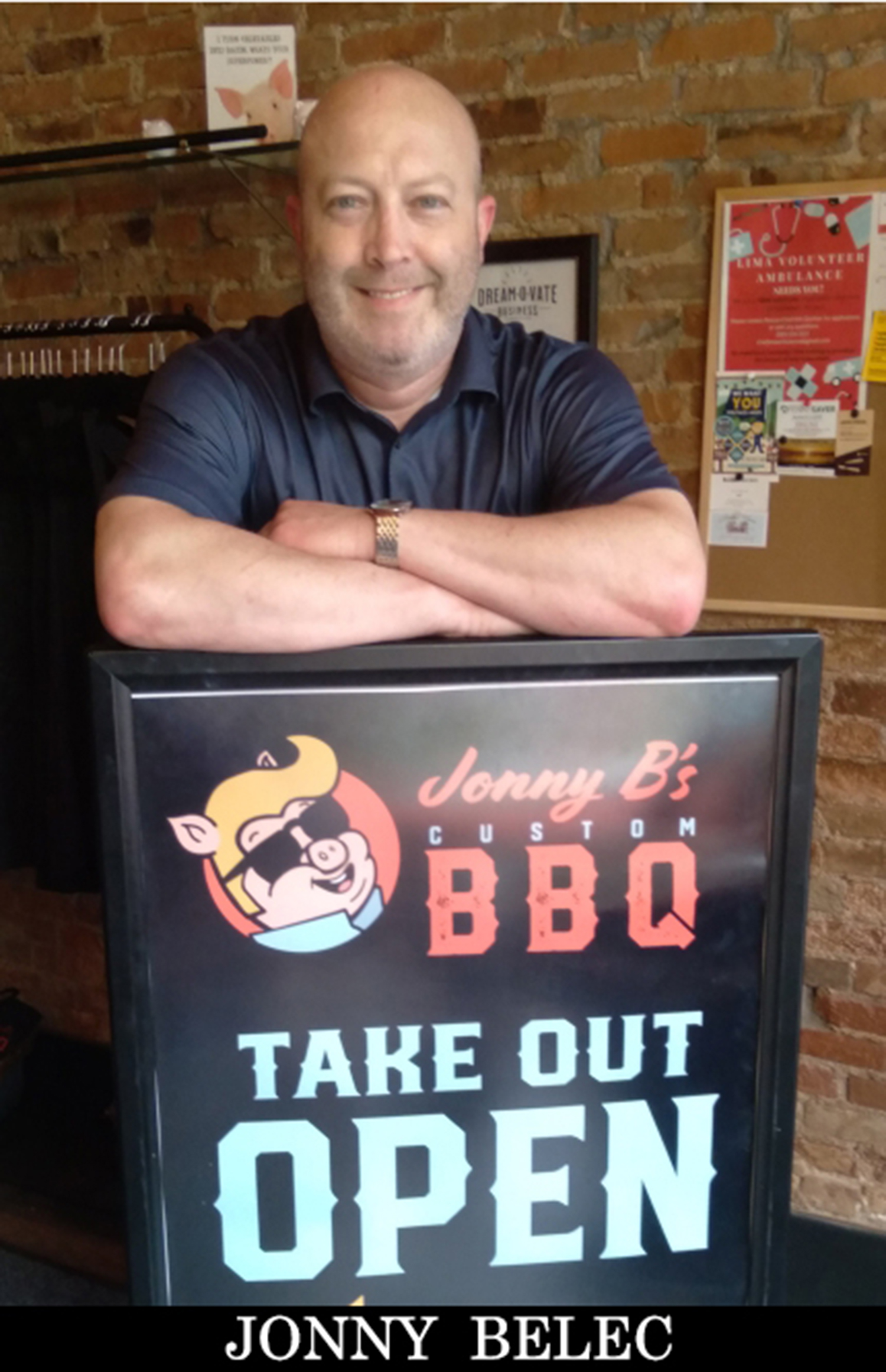 BY DEB AND TIM SMITH
Jon Bon Jovi once sang, “Who Says You Can’t Go Home?” Well, Jonny Belec has answered that question with a resounding, “No one,” because he has returned home to his Lima roots to open Jonny B’s Custom BBQ. It’s the hottest new place in the area to score a great barbecue lunch or dinner and it’s already raking in awards, which we’ll get to in a minute.

In addition to the takeout that’s currently available, there is a two-year plan to turn this unique building in downtown Lima into a destination location for indoor dining and live music. Jonny B’s is located at 1883 Rochester Street, across from the Presbyterian Church, not far from the light.

Let’s reset to the roots of this story and we’ll connect the dots to the present. Jon grew up in Lima in the 1980’s, and worked for Harry & Milt Smith and Dave Meizensahl as a farmhand during his teens.

Jon always had an interest in the culinary arts and worked in various restaurants throughout his youth. He subsequently took a break for a military stint with the Marines and to get his undergraduate degree. Once that degree was achieved, Jon vowed to never return to food service again… unless he owned the place.

So while owning the place was always a dream in the back of his mind, Jon spent 13 years at FLCC as a tenured professor in Music Recording and Production (Audio Engineering Technology). The turning point of the story occurred in December of 2018 when Jon, then in his early 40’s, saw his life at a crossroads. “I realized,” said Jon, “that if I didn’t make the leap soon, I never would. I couldn’t see myself attending faculty meetings into my 60’s.”

Jon took the leap of faith, starting off as a Food Truck/Catering Service in 2019 (Phase 1), with a takeout restaurant which had its soft opening in July of 2020 (Phase 2). That’s where we’re at right now.

Looking forward… dine-in seating is planned for this fall (Phase 3), and finally, there will be an event space for live music and community gatherings somewhere down the road. This will be a family-friendly environment with beer and wine (Phase 4).

As Jon led us on a tour through his large complex, we were amazed by the potential. There is lots of work to be done but the original beauty of this classic structure which dates back to the 1860’s is inspiring. It basically takes up three storefronts in the heart of Lima.

Jon mentioned how his wife Nicole and sister Deb Erion have played important roles in running the kitchen and handling the busy summer season which is underway. To date, Jonny’s Custom BBQ has been presented with the 2021 Livingston County Chamber of Commerce award for “Most Promising New Enterprise” and the Livingston County “Dream-O-Vate” award for innovative business ideas.

Jonny B’s Custom BBQ can be reached by calling 585-582-PORK and you can visit their website at www.JonnyBsCustomBBQ.com. Current hours are Wednesday – Saturday 11am – 8pm. They plan to soon be open on Tuesdays.

Returning to the Bon Jovi theme with which we started this piece, we’ll summarize Jon Belec’s return to Lima with the second line of Jon Bon Jovi’s song. About Jon’s return to Lima, “There’s only one place they call you one of their own.” Good luck, Jon!