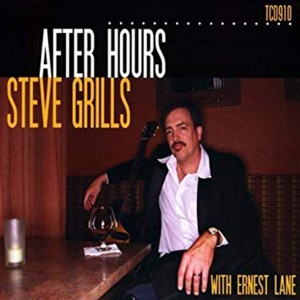 BY DEB AND TIM SMITH
RESET ~ As a sign of the times, we are undergoing a rewrite of this week’s column due to the coronavirus pandemic. This is the third component of a 5-part piece we wrote about Lima blues guitar great, Steve Grills. We started it earlier this month with the timing designed to wrap around the gig Steve had booked at Fanatics Pub in Lima for this Saturday night.

Obviously that show will not go on as scheduled. As we are midstream in the series, we will continue it for the sake of literary flow and our original schedule already had the last two parts publishing after the show anyway. So since we can’t encourage you to go to the show this weekend, we’ll rephrase our intro as follows. When this whole crazy thing is over and life returns to normal, as it someday will, the next time you have a chance to see Steve Grills live, be assured that it’s an opportunity that should not be missed.

FAVORITE PLACES TO PLAY ~ We asked Steve about his favorite venues at which to play and he came up with a couple that stood out for him. One was the Dinosaur Bar-B-Que in downtown Rochester. That totally made sense from a genre perspective because the musical theme at the Dinosaur has always been the blues. The other piece of that puzzle is that it is only five minutes away from his home where he lives with his wife Lyla and daughter Violet.

The other venue Steve talked about was the Steuben Brewing Company in Hammondsport. Obviously that one’s not very close to home; it’s over an hour away, but Steve likes it because the audiences there are always so enthusiastic.

TODAY’S GIG ~ Our interview with Steve Grills took place on Sunday September 23, 2019, a date which was chosen based upon the fact that Steve told us he had a gig in Mendon that afternoon. This of course left us wondering, “Where in the world would Steve Grills be playing in Mendon at 3:00 on a Sunday afternoon?” We figured it had to be some kind of private gig, which it was, and the back story was rather interesting.

Steve had “donated” the gig to a charity fundraiser to benefit the EquiCenter which is located on Rush Mendon Road. His donation was part of an effort which raised $20,000 for the Equicenter’s vital therapeutic programming. This local nonprofit facility serves those with disabilities, veterans, and at-risk youth.

FAVORITE ARTIST ~ When we asked Steve who his favorite artist was, he didn’t want to be pinned down to just one, so he spoke of several artists who served as influences for him and one in particular seemed to stand out. That would be Freddie King who was an American blues guitarist and singer whose popularity peaked during the 1960’s. Steve mentioned King’s song “Hide Away” which crossed over and was also a hit on the pop charts, going to #29 in 1961.

King died young, at the age of 42 in 1976. “I loved him, but I never got to meet him,” Steve said, “however I did get to play with his brother, Benny Turner.” Freddie King was inducted into the Rock and Roll Hall of Fame in 2012.

CHICAGO BLUES FESTIVAL ~ In 2009, Steve played at the Chicago Blues Festival. There he was featured with legendary blues pianist Ernest Lane in a tribute to Robert Nighthawk, himself a legendary blues musician. This collaboration with Lane would foreshadow Lane’s participation on Grills’ first commercially released CD which we’ll tell you about next.

AFTER HOURS CD ~ In 2011 Steve released a CD called After Hours. The CD charted an impressive #39 on the Roots Music Report’s Top 100 Blues Albums for 2011. It is available online at CD Baby and locally at Record Archive, House of Guitars and the Bop Shop.

Playing piano on the disc is the aforementioned Ernest Lane who grew up with Ike Turner. The two played piano together as kids and Lane went on to play with the Ike and Tina Turner Revue. The CD features 12 tracks, all Steve Grills versions of classics blues tunes.

We hope to see you back here next week where we will share with you some of Steve’s “firsts” and “lasts” and also detail some of the highlights of Steve’s last Lima gig which sold out on November 2, 2019.