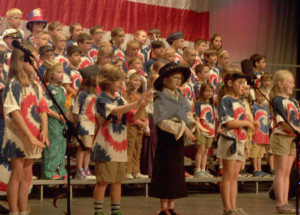 The students in the six second-grade classes at Honeoye Falls-Lima’s Manor School presented a stirring musical tribute to the United States during two performances on June 13.

133 students took part in “America…A Proud Nation”, a musical tribute to the United States of America in a morning show and an evening show. The children opened the show by marching into the District Auditorium singing the song “We Love the USA”.

After all the classes gathered on the stage, the students in Mrs. Fleming’s class sang “The United States” during which they named each state in the nation. The students and audience members then recited the “Pledge of Allegiance” after members of Honeoye Falls American Legion Post 664, Lima American Legion Post 282 and Lima Veterans of Foreign Wars Post 28 presented the colors.

Students from Mrs. Leonard’s class sang “The Star Spangled Banner” while also using sign language to communicate the song. All the students then sang “My Country ‘Tis of Thee.”
Children in Mrs. Patton’s class presented “America, America” with some of them singing and others accompanying them.

Students in Mrs. Schilstra’s class sang “Yankee Doodle/Grand Old Flag”. That was followed by all the students singing “Thank You Soldiers” during a slideshow showing photos of students’ family members or community residents who were or are in the military. Two students then played “Taps Prologue” on trumpets while other students recited quotes.

Mr. Fallon’s class sang “America the Beautiful” for their part in the show.

The last class, Mrs. Erickson’s class, performed “Famous Americans” with some of them singing and others playing instruments. The production ended with all the students singing “Proud to be an American”, also known as “God Bless the USA”.